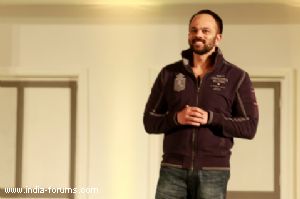 Director Rohit Shetty, known for making action comedies, takes it forward as the host of TV adventure show "Khatron Ke Khiladi". He accepted the offer because he feels people can relate the show to him.

Asked what made him say 'yes' to the show, Shetty laughed and said: "Just imagine me sitting in Karan Johar's place and hosting 'Jhalak Dikhhla Jaa' or 'Nach Baliye'. People will not associate it with me."

"I thought this is one show where even I can give something rather than just sitting there. The whole format, and the earlier seasons that I have seen, I felt it's a grand show infused with action. I am quite excited about it," said Shetty.

This is not his first stint as a host of a reality show. The 40-year-old had previously hosted "Big Switch - Season 3" and was seen actively encouraging the contestants.

And in "Khatron Ke Khiladi" too he will try to help participants overcome their fears.

"I will definitely encourage them. And the biggest fear is what people will think of them if they are unable to do something. So, I will try and remove that fear (from their minds) - I'll tell them there is another day and they can improve," he said.

NG.MAAN 6 years ago Gurmeet Choudhary Many many Happy returns of the Day... keep rocking.

-Natasha 6 years ago Loved all your latest pics, Gurmeet Choudhary... love u most but...

Naterguru 6 years ago its like a treat watching u dancing n hope it ll b pleasure watching u in kkk... just take care of u n stay safe.. love u gurmeet choudhary.