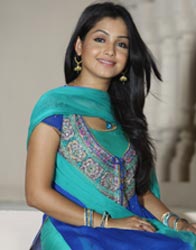 Shubhangi Aatre, who plays Preeti in Imagine's Do Hanson Ka Joda is all for parents and family values. She talks about her new show, her views on how marriage decisions should be made and her future plans.

How's the going been in Do Hanson Ka Joda?
The going's been fantastic! It's a beautiful show and I consider myself lucky to be a part of this show. This is very different from anything I've seen before. Its sweet, simple and real.

Tell us about your character Preeti.
Preeti is this very filmy girl who refuses to come out of her dream world. For her, whatever she sees in the movies is reality. She expects her soul mate to be like those typical Bollywood heroes. But when she eventually gets married to this very simple guy she is heartbroken. However, later she realizes that there's something called inner beauty and that's what's more important.

Do you relate to Preeti?
Preeti is an ideal girl and to be like her is very difficult. However, I can empathize with her because our backgrounds match, the moral values with which we've been brought up is the same. I'm also the youngest child in the family, like Preeti, and while growing up got pampered a lot!

Your character got married to this simple person who she is not at all in love with because of her mother. Do you feel, this is the way it should be in real life?
I believe parents' decision is important because we should not fail to understand that they have experienced life better than us. But I also want things to be settled with mutual understanding. In Preeti's case, her mother understood Preeti very well. She understood that her daughter is full of fairytales in her head and that the real world is something else. Her mother didn't have the time to explain to Preeti that reality and movies are very different.
Also, if you go to see not every girl is like Preeti and do exactly what the mother says. The girl may resort to some wrong measure too…which would end up hurting a lot of parties. So decisions are always better after transparent discussions.

Tell us about your rapport with co-actors.
We all are very good friends. Everyday is a party on sets. I knew Ali even before Do Hanson Ka happened. Shaleen is someone who I met through the show and we've struck a chord with each other. Now we are good friends and it helps to have a good relationship with your on-screen partner. Reema ji is a treasure house of talent. I'm fortunate enough to be working with her because everyday she teaches me new things.

How is it working with Rajshri Productions?
After working with Balaji I feel fortunate to get associated with another reputed production house. Sooraj ji and Kavita ji have made a splendid reputation for Rajshri Productions. They are known for creating films and shows, which reflect Indian values and traditions. Their projects are always something that you can enjoy with your family. And the production house lives upto its standards every minute of every day. Things are so well organized. It makes working so smooth!

What plans for future?
Right now, I'm fully concentrating on Do Hanson Ka Joda. This show gives me a lot of scope for performance. This is only my second show so I've got a lot to learn. As an actor there's always hunger for new characters and I am looking forward to many new roles in future. What I'm most fond of and eager for is parallel cinema. I hope I get to work in one someday, provided I have your love and support.

Your message to fans.
You had given me a lot of love when I played Kasturi. I just want you to appreciate me as Preeti too. Please continue to encourage and support me.

RokaFan 12 years ago all the best shubhangi..your fans would always support you..How I wish(rather, I know many of us wish) you'd pair up with Karan again and do a serial. You both rock as a pair..

+ 2
12 years ago SHUBHANGI YOU NEED NOT WORRY.ALL YOUR FANS ARE ALWAYS THERE WITH YOU,FOREVER AND EVER.WE ALL LOVED AND IDOLISED YOU AS KASTURI AND NOW AS PREETI AS WELL.YOU ALWAYS ROCK!!!!!!!
YOU'RE THE BEST.

13 years ago she is too sweet,
Loved her as kasturi nd now as preeti.

13 years ago like shubhangi.plz sighn some new project with karan patel.

+ 4
13 years ago I LOVE YOU SHUBHU!!!!!
You're beautiful, amazing, and the BIGGEST gift tellywood's recieved!
Keep it up, and I hope that you get anything and everything that you've wished for!
You're my role model &lt;3