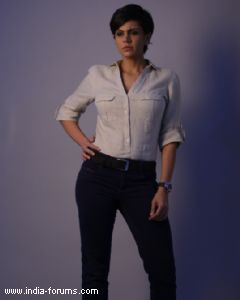 Actress Mandira Bedi admits she works out like a beast, but she should not eat like one. She says she will now restrain herself from eating excessively.

"I work out like a beast. I should learn not to eat like one. Zipping it today onwards," the 41-year-old tweeted on Wednesday.

She was last seen on the small screen in Anil Kapoor's TV production 24 tele-series on Colors.