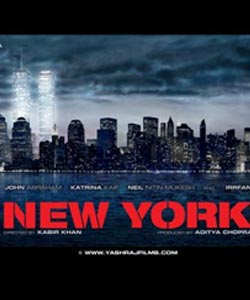 After its recent invitational screening at the Pusan International Film Festival in October this year where it was the only mainstream Hindi film to have been screened, Yash Raj Films' NEW YORK has now been selected as the opening film at the prestigious 33rd Cairo International Film Festival (CIFF), 2009. The film has also been selected for the 'in competition' section at the festival.

Established since 1976, the Cairo International Film Festival is classified as a category "A" festival as recognized by the FIAPF (International Federation of Film Producer's Associations) and is undoubtedly the oldest and most important festival in the Middle East and has been an inspiration to several other budding festivals. This year the CIFF will acknowledge its honored tradition and welcome the new generation of brilliant filmmakers from India by honoring Indian Cinema. The festival will be held from 10th to 20th November in Cairo and will be attended, besides others, by Salma Hayek, Samuel L. Jackson, Lucy Liu and Tom Berenger, who is also a member on the international jury.

Directed by Kabir Khan, produced by Aditya Chopra and starring John Abraham, Katrina Kaif, Neil Nitin Mukesh and Irrfan, NEW YORK released in over 900 screens worldwide on June 26, 2009 and ever since has continued to garner worldwide acclaim and recognition.

NEW YORK is a contemporary story of 3 young friends whose beautiful lives are turned upside down by larger events beyond their control. The film was critically acclaimed as well as wholeheartedly accepted by audiences the world over.

Kabir Khan has been especially invited by the Cairo International Film Festival to attend the festival this year. He will address the audience and media after New York's opening night screening.

'Indian Bollywood Actress smiles at Athens': Deepika gets a Statue at ...