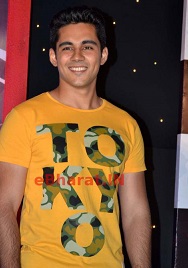 Actor Abhishek Bajaj who is currently seen as Ishan in DJ's popular show Ek Nanad Ki Khushiyon Ki Chaabi...Meri Bhabhion Star Plus' is very similar in his real life when compared to his reel life character of Ishan who is a fun loving guy in the show.

TellyBuzz spoke to the actor to know more about his reel and real life.

Talking about his background and about bagging the show Meri Bhabhi, Abhishek says, "I am born and brought up in Delhi and I am a Punjabi guy. I did my Economics honors from Delhi and I was doing modeling there. I am a soccer player and a cricket player too; I used to play league matches. It's just 1 and a half year that I am in Mumbai. I wasn't here for modeling purpose or acting; I just came here for a family function and then I came to know about auditions going on so I opted to give auditions and I got selected in the very first round of the audition. Then I got my first show Nayi Umr Nayi Chunauti - Parvarrish - Agla Padav which was also produced by the same production house. I shot with them in the month of July for Parvarrish and my track was going good. I took a break of 2-3 months as my track in the show was not promising enough so I got chose to do commercials then and got busy with it later. After that only, they offered me Meri Bhabhi and this is how the show happened to me."

When asked Abhishek whether is he similar in real life when compared with his on-screen character Ishan, he says, "In some ways I am related to him. I am very chilled out and a fun loving guy like Ishan. He is always ready to take a stand for anything and he is possessive about his family. These are some of his qualities which make me relatable to the character of Ishan."

The entire Meri Bhabhi unit shares a very good bonding with each other, elaborating on the same, Abhishek further added, "We share a very good bonding with each other. I have got very good co-stars to work with. My on-screen brothers are like 'Dilli ke yaar' for me. We are very close to each other and the same kind of bonding we share with my on-screen bhabhi (Esha Kansara), On-screen sister (Kanchi Kaul), Kuku sir (Kanwaljit Singh) and Supriya ma'am (Supriya Pilgaonkar). They all are very good persons and I am having a very good experience being a part of the show."

"Right now I am focusing on the show, I haven't planned anything for future as of now," consludes Abhishek when asked about his future plans.

PiyaSarkar09 6 years ago Aww,so sweet of u..:) love u ishaan aka abhisek:)

-Red-Rose- 7 years ago love all the cast of Meri Bhabi..love you kanchi,esha,ravish,vipul and all are doing an amazing job...keep rocking guys!!&lt;3

julijasmeen 7 years ago Love this show..love Abhishek, Esha Kansara, Ravish desai, Kanchi Kaul, Kanwaljit, Supriya and all the cast of this show.

.albatross. 7 years ago This show is FANTASTIC! and everyone in the cast is doing a brilliant job. :)

starsshinex 7 years ago This show is really amazing!!! Love each and every cast of the show. And all the best to you Abhishek.