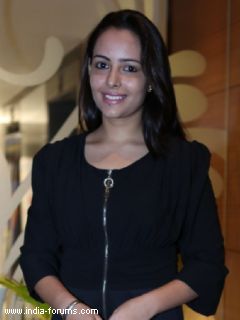 The very pretty and talented actress Anchal Munjal who has been seen in many popular shows like Nayi Umr Nayi Chunauti - Parvarrish - Agla Padav, Bade Acche Lagte Hai, Ek Boond Ishq and many more, celebrated her birthday yesterday on 13th April. The young actress turned 17 yesterday and threw a birthday bash at an elegant place Kino's Cottage which had a breathtaking view of the sea.

The evening saw Aanchal's friends dropping in and enjoying the party to the fullest. Aanchal was seen mingling around mostly with her close friends and popular actor Rohan Shah was among them. Aanchal was also wished and greeted by the people who were associated with her while working in the film 'We Are Family'. Also many stars like  Vishal Singhh, Rajesh Puri, Rakshit Wahi, Nidhi Uttam, Dishank Arora, Shresth Kumar made their presence felt at her bash as they had worked with Aanchal in her TV show Ek Boond Ishq and Nayi Umr Nayi Chunauti - Parvarrish - Agla Padav.

It seems that Aanchal is still very much attached to the family of Parvarish and so much so that she still addresses Vishal Singh as her Papa and Rajesh Puri as her Nanu. On the other hand Vishal too praised Aanchal's acting skills and wished her warmly on her birthday.

Talking about her birthday celebrations, an elated Aanchal told us, "I had called all my co-actors whom I have worked with in these 8 years. I just partied with them and had lots of fun. I was in the car when the clock ticked 12 and I was flooded with calls for the birthday wishes. When I reached home, I got a nice surprise from my friends and I cut the cake which was bought by them. Then another group of friends too came and they too bought a cake. So, this is how I celebrated my birthday."

Aanchal got so many gifts and blessings on her birthday but she is getting a very special gift from her Mom for her birthday. When we quizzed Aanchal about it, she told us, "I have always wanted to travel to the North. So, she is taking me for a trip to Gangtok, Darjeeling and other places. It's going to be a 25 days trip. It's a very precious gift for me."

She also got many unexpected surprises and was delighted to be blessed by so many people as Aanchal shared, "I got some unexpected surprises last night. Many people called up and wished me including some of them whom I have never spoken in my entire life but still they called me up and wished me. I am feeling too lucky and happy to be blessed with such great people in my life."

When we asked the birthday girl about her birthday wish, she laughingly told us, "My wishes keep changing every minute. I have so many wishes which I want to get fulfilled."

Along with her birthday, there was another reason for Aanchal's happiness; she has been featured in the recently launched Yuva Bharat magazine. Aanchal said, "The first and special edition of the magazine covers me and my new photographs. I am feeling very happy to be the face of the magazine on my birthday month. It's just the beginning; I have a long way to go."

Thanking her fans for their wishes she concluded saying, "I just want them to love me as much as they do right now. It's because of them that I am who I am today. I just need your blessings and love."

7 years ago Love to Anchal

7 years ago Ek boondh is the best...happy birthday aanchal

7 years ago best wishes for you future...

7 years ago All the best for your future Anchal

7 years ago Happy birthday anchal... you were fab as radha in Ek Boond Ishq...

+ 3
7 years ago HB Aanchal. Wish you luck for future projects.