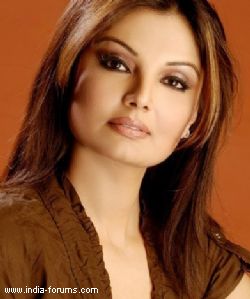 TV's bold actress Deepshikha Nagpal who appeared in Baal Veer on SAB TV as Bawander Pari is all set to make an entry in a popular show Madhubala - Ek Ishq Ek Junoon on Colors as Abhay Kapoor's (Gunjan Utreja) mother.

Deepshikha who is very much appreciated for her acting skills has an utmost desire to work with the legendary actor Amitabh Bachchan. The actress who is active on the social networking sites tweeted that "@SrBachchan sir my wish I want to face camera with u once. And my wish is the universe command."

Well it will be dream come true for the actress who has acted in more than Bollywood films but will work with the super star for the very first time in her life.

When contacted Deepshikha to know more about her desire of working with Mr. Bachchan, she told us, "Which actress doesn't want to work with Mr. Amitabh Bachchan. He is a legendary star and I am a big fan of Mr. Bachchan. I have already done many films with almost all top actors, but I never got a chance to work with Amitabhji. I really want to work with him at least once. I follow him on social networking sites, I read all his post."

Post her role of a mother in Sony TV's Hongey Judaa Na Hum, this bold actress is once again set to play the role of a mother in Color's show Madhubala- Ek Ishq Ek Junoon. When asked Deepshikha about the same, she says, "I am playing Abhay Kapoor's mother and it's a character with a grey shade. I know I have mostly played negative roles in my career, may be because of my personality but let me tell you that, I am completely different person in real life. I enjoy doing roles of vamp as I am appreciated for those kinds of roles."

She further adds, "When Madhubala happened to me I was getting offer for films also, but I chose to be a part of Madhubala because it is a very nice show and I really like this show."

Well, as per the news which were making the rounds from quite some time now about many TV actors are being considered for the role of Abhay Kapoor, it was observed that even Deepshikha's husband Kishav Arora's name was being considered for Abhay Kapoor's role. So when asked Deepshikha if Kaishav Arora would have been roped in to play the character of Abhay Kapoor, would she still aceept this role? She simply says, "I would have rejected the role because I don't want to play his mother's role."

We wish Deepshikha all the very best for her film as well as her role in Madhubala - Ek Ishq Ek Junoon!

manesha76 6 years ago Drashti Dhami is the only Reason i am watching Madhubala serial ... Deepshikha is good actress !!!

DANGGG 6 years ago she is soo good as AK mom!

ananya2010 6 years ago Welcome to the show, Madhubala EIEJ Rocks.

-chrys- 6 years ago All the very best for your film as well as Your role in Madhubala - Ek Ishq Ek Junoon!...

she is looking awesome