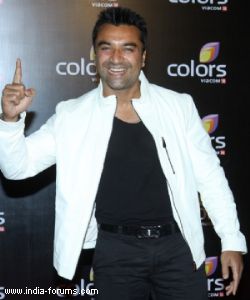 Actor Ajaz Khan who was recently seen as one of the contestant in stunt based reality show Khatron Ke Khiladi Darr Ka Block Buster on Colors has been evicted from the show. As Ajaz earlier was a part of a reality show Bigg Boss Saath 7 on the same channel, he was thus approached for Khatron Ke Khiladi Darr ka Blockbuster. While Ajaz was being criticized by the housemates during his stay in the house for his rowdy language but his daring attitude made him popular on the show.

Here is Ajaz sharing his experience in the daredevil stunt based show Khatron Ke Khiladi Darr ka Blockbuster, his difficult stunt, his fear and more...

How was your experience being a part of Khatron Ke Khiladi Darr ka Blockbuster?

It was a great experience being a part of this show. It was life time experience and every one must experience something like this at least once in their life.

How did you made up your mind to participate in such a daring stunt based show?

It is always said that you must take risks in your life, without that you don't get anything. So I thought of trying something different and thought of taking risks and so I made my mind of participating in Khatron Ke Khiladi Darr ka Blockbuster.

What was your biggest fear? And were you successful in overcoming your fear through this show?

My biggest fear was to get locked up in a place where I can't breathe. Since I am a claustrophobic, I was able overcome my fear to some extent.

Which was the most difficult stunt amongst the stunts you have performed?

The last stunt where we had to lie down in the huge plastic bag and there were 1000 of cockroaches in the plastic bag. And eventually the bag is put in the coffin along with the cockroaches. It was the most promising experience of my life. Then the other stunt which I remember was we were locked up in a box which was variably hanging with the help of a crane and inside the box we were showered with cubes of ice and we had to untie all the flags within a given time limit.  These were the most difficult stunts.

You were a wild card contestant and you could only survive for 3 weeks, what is reason that you got eliminated so soon?

I was wild card contestant because I am very wild (laughs) actually as I told you that I have claustrophobia so the creative thought of giving me the stunt which will be very difficult for me. I was kept in a huge plastic bag where I was not able to breath and on top of that they kept me in the coffin. If that stunt was planned properly to execute then I think I would have been a tough competitor and would have survived for more than weeks.

Have you done any daring stunt in your real life before being a part of this show?

I have done many stunts in my life. As I am an actor from South and I am a Bad boy actor there, so I have done many action scenes in the films. I have even got a cut in my leg while performing the stunt during the shoot. Thus I was very confident in the show.

How was your equation with the other contestants who was already there on the show from the beginning?

Basically Deana was my good friend as we came together in the show. Later Karanvir Bohra and Teejay Sidhu became my friends. While I had a great time with these above contestants however, I shared a cordial equation with rest of the other contestants.

What are your future plans after this show?

Currently I am shooting a Bollywood film Love day and I am busy in that. I don't want to do any fiction shows on Television but I will definitely want to be a part of the reality show. Right now I can't take up any show but I am really looking forward to be a part of Jhalak Dikhla Jaa next season because I don't to give everything together to my audience. I want them to wait and see me after small gaps.