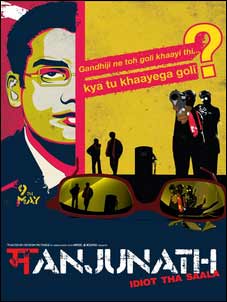 A few live to narrate their tale a number of them thrown in jail, some silenced and in Manjunath Shanmugham's case - shot dead on duty. Viacom18 Motion Pictures' (VMP) in association with NFDC and ICOMO presents "Manjunath", a biopic on IIM graduate Manjunath Shanmugham who was brutally murdered for standing up for what he believed was right. He was one of us - young, idealistic and educated from one of the finest B-Schools in India, but he lost his life at 27 as he exposed the petrol adulteration scam by the fuel mafia in Uttar Pradesh in 2005. Supporting his story, VMP today announced the launch of the trailer for "Manjunath".

Adding an edge to the film, the music has been composed by the Delhi rockers - Sonam Sherpa, Nitin and Subir Malik (Parikrama). Driven by Manjunath's saga, the band for the first time ever was inspired to compose music for the entire film including the background score, as they haven't ever released a full length album before Manjunath. Having invested three years of research to build the truth of the sequence of events that occurred in 2005, the film has been directed by Sandeep Varma and is slated for a May, 2014 release.

Talking about their decision to produce this film, Ajit Andhare, COO - Viacom18 Motion Pictures says, "Some stories need to be told. Manjunath's story is one of those that becomes even more important in today's time that brings the extraordinary out of an ordinary man. It is one of those films that make you introspect. As a studio we stand committed to bringing to life the character of the formidable - Manjunath Shanmugam. He was definitely more than a news-headline."

Director Sandeep Varma, reputed ad-film maker and the Managing Director of ICOMO, said, "Frankly, it's a privilege that I got the opportunity to direct and write this film on a real life hero who inspired so many. Manjunath' begins where the headlines ended in 2009 - it goes beyond an incident. It's more about - why can't straight-line, honest work done with heart and brains be rewarded? Why should such people be killed? The film taps into this seething frustration, and that's why I feel this film appeals to everyone."

"Manjunath is an inspiring biopic based on the life of a fearless individual who was killed battling the corrupt oil mafia in the remote villages of UP. NFDC always endeavours to support diverse cinema and talented filmmakers like Sandeep Varma who have a vision to bring forth compelling stories to the nation. We are happy to present the first look of the film and hope that it evokes a strong sense of empathy and pride amongst the audiences", says Nina Lath Gupta, Managing Director- NFDC (National Film Development Corporation).
0 Likes