the “Piya Basanti” girl, kept away from the silver screen for long time. But soon she will be seen in the film “Sirf”. In the film she will be seen with new co-star working under a fresh director. But she is not depressed with what she has been offered by the industry as she believes that life means something more than the calculation of flop and hits. Here is a scrap of conversation with the beau ideal Nauhid:

Q.: Please tell us about your character in “Sirf”.
A.: I am playing a Gujrati girl called Shalu in “Sirf”. She is independent in nature and very practical. She loves Ankur very much and wishes to have their house in Mumbai. She is always very caring for that dream.

Q.: Is there any similarity or dissimilarity between Shalu and Nauhid?
A.: Shalu and Nauhid have difference of only one thing. Where Shalu is practical Nauhid is always in hurry which is comparatively impractical. As far as the similarity is concerned I also had the dream of owning a house in Mumbai and due to the grace of god it’s no more a dream now.

Q.: How much scope do you think you have in th 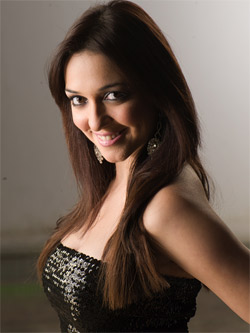 Featured Video
is multistarrer film?
A.: I never differentiate between multistarrer and solo films. Screen presence is all that matters to me. I have witnessed many times that there are characters with screen presence for just two minutes but they leave their impact for the whole movie. And I am really happy that each of our characters have been well defined by Rajat. And he has designed my character very well.

Q.: There are stars like Kay Kay Menon, Sonali Kulkarni, Rituparna Sengupta and Manisha Koirala sharing screen with you. Have you learned anything from them?
A.: It’s really sad that I don’t have many scenes with Rituparna, Kay Kay as well as Manisha. Most of my scenes are with Sonali Kulkarni. Getting closer to her I came to know that she is not only an excellent actor but a great human being also. I still remember that she used to brought coconut and pea-nut ketchup, which in Marathi is called ‘Chetha’, at the floor for me. She really is such a sweet lady.

Q.: It’s the first film by Rajatesh Nayar. How do you like him as a director?
A.: He is such a director who respects all the actors. I remember that he never wasted time of any actor. He used to call actors only if that actor is required for the scene. At the same time he had no hesitation accepting our logical thoughts regarding scenes. I think he will emerge as one of the best directors of this industry.

Q.: What about your co-star Ankur Khanna?
A.: He is simply an easygoing person like me. We have many similarities. And that’s why our wave length as well as chemistry worked out on the screen very well.

Q.: Please tell us about your upcoming films.
A.: I have four films other than “Sirf”. There is Tarun Kumar’s “Rafu Chakkar” which completely is a slapstick comedy. I am acting with all the new actors in this film. My next film, Rajan’s “Love Ka Tadka”, is a super comedy. I am really enjoying shooting this film. In this film Satish Shah is playing my father whereas Samir Duttani is posing as my boyfriend. I am playing an important character in Kumar’s “Seven”, a film based on the story of seven blind children. And I must mention that this film has changed my life forever. It’s after watching them that I understand life means something more than hits and flops. I see that they love even their blindness so much but we keep crying and complaining all the time despite having so many things. Besides all I have signed Sohail Khan Production’s “Kisaan”. I think it’ll be the best film in my career.

Q.: Please tell us about “Kisaan”.
A.: We just have started shooting for the film. It’s too early to say anything about the film now. I can only tell you that I am playing a Punjabi lady called Titli. I am really excited that I am sharing screen with Sohail Khan, Arbaaz Khan, Jakie Shroff and Dia Mirza in this film.

Q.: You have two comedies and two serious films. How much do you expect from these films?
A.: I always expect exactly the same as it can be expected from a film. I think for getting good result out of a good film it has to be marketed well. Marketing has to be so strong that people get obliged to watch the film for at least once.

Q.: That means marketing is the only responsible matter for all the flopped films till day.
A.: Maybe. “Lakeer” didn’t work well but its songs made a good market. It was the same with “Anwar”. Its songs worked well than the film.

Q.: What would you like to say about “Life Mein Kabhi Kabhi”?
A.: The only problem with that film was that the film was not made to that extent as it was hyped. It dodged the college students’ fun-feelings and attained unnecessary serious tone. At the same time it was not marketed well. But I don’t think Vikram Bhatt is responsible for that. He did his job with utmost integrity and dedication. As far as marketing is concerned the producer is the only responsible guy behind that. Director accomplishes his job and the film gets ready for audience. If the producer is not ready to publicise it properly then no one can help it.