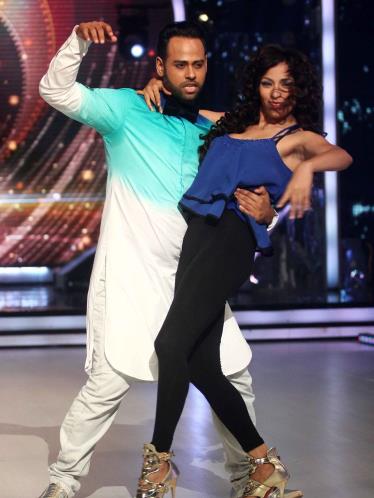 VJ Andy rose to fame as a host of many televisions shows. Later he was seen as one of the contestant in the reality show Big Boss Saath 7 on Colors where the  audiences liked him for his stint in the show. Next he got a chance to host television's most popular reality show India's Got Talent Season 5 on the same channel. Now he was seen in the popular dance reality show Jhalak Dikhhlaa Jaa Season 7 on Colors. But unfortunately he was the first contestant to get evicted from the show.

Thus we got in touch with Andy to know about his experience and journey.

Lets find out what he has shared.

How has been your journey in Jhalak Dikhhlaa Jaa Season 7?

The journey was interesting, full of surprises; there were different types of notions. There were many ups and downs but we had a great fun. I got many new friends and it was a great experience. It was really shocking for me that I got less number of votes from the audiences.

What is the reason because of which you got eliminated in the first episode?

Actually we started with our practice one month before the show started but at the last moment we were told that we cannot do the dance which we have prepared as it was not suitable. So we got a very less time to prepare another dance and I guess that is the reason why we got eliminated first. Another reason is that Bhavini my choreographer who is a great dancer but is inexperienced in Jhalak Dikhlaa Jaa as she choreographed for the first time. If I would got some experienced partner then I don't think that I would have been eliminated first. She is a very good choreographer but not yet for Jhalak. When I heard that I am in bottom two it was really shocking for me that I got less votes. Every one told me that they love me they will vote for me then how come I came in the bottom two. Later when I saw Sophie Choudry's performance it was very good and I became sure that I am going today.

Which is your favorite dance form?

Kathak is my favorite dance form as it is a beautiful traditional art. I really like doing this form of dance and wanted to do it on the stage of Jhalak Dikhla Jaa but unfortunately I couldn't do it.

Who is the strongest contestant according to you?

This time all the contestant are strong specially Shakti Mohan she is a great dancer and also the winner of DID. Other than her Ashish Sharma, Karan Tacker, Mouni Roy, Kritika Kamra and more are also very strong contestant as they are very popular also. So they will get good votes.

Maksim is really a great judge he complimented me and liked my performance for which I am really happy. Madhuri Dixit Nene, Karan Johar and Remo Dsouza are also good. There comments are really valuable.

As this season it was said that level of competition is tough and judges will be stricter, so how did you prepare yourself?

As I told in my previous answer that we started with our practice one month before but unfortunately couldn't do that performance. Before I used to do dance but later I got some back problem because of which I went through a back surgery. This was really problematic for me while doing the practice but I managed.

What are you future plans? Are you planning to do another Television show after being a part of 3 reality shows?

I participated in Bigg Boss, later I hosted India's Got Talent and now Colors gave me a chance to be a part of Jhalak Dikhlaa Jaa. I am really thankful to the channel Colors as they gave me such a great opportunities and today I have reached to every house through television. After Jhalak there are many projects in the pipeline and will definitely come back soon with something new.

TellyBuzz wishes all the best for the future.

nupurdas1 6 years ago Karan Tacker u r d best.
Love u so much.

KrAkMg.FuckRest 6 years ago Love you Shakti Mohan...
You're the best
You rock

Angelic.x.Chaos 6 years ago Ashish and Shakti you rock!! love you...

karanikaNarjuhi 6 years ago love you kritika and ashish!!!! keep doing ur best in jhalak

Rudra77 6 years ago Ashish sharma, i watch Jhalak only and only for you,,you are The best .,

Rudraparo11 6 years ago Ashish sharma.waiting for you setting the dance stage of Jhalak on fire with your dance moves ..can't wait for tomorrow...

Kriyansh 6 years ago Love you Shakti Mohan..rock it shacks your the best...

KrAkMg.FuckRest 6 years ago Shakti Mohan dancing diva you roak...
You're going to burn the dance floor
:)