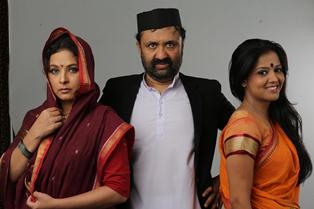 Though the talented actress Gulki Joshi who was last seen as Sugni in Zee TV's popular show Phir Subah Hogi is absent from the small screen but the actress is keeping herself busy doing theater these days. Gulki is quite excited about her upcoming play Sakharam Binder which is to be released in Rangsharda theatre in Mumbai. TellyBuzz spoke to Gulki to know more about her play.

Here it is Gulki sharing the details about her play.

Talking about the play and her character, Gulki says, "This play is called Sakharam Binder by Vijay Tendulkar in which I am playing the character of Champa. Champa's character is totally opposite to that of Lakshmi's character (played by Sharbani Mukherjee). Lakshmi is a meek and emotional girl while Champa is bold and confident girl. She knows how to deal with her life."

She further added, "It was a fantastic experience and a great fun doing the play. The story of the play itself has a twist in the tale. The story of the play focuses on topics like exploitation, caste differentiation, gender biasness, moral issues and much more. Vijayji has brought about all the topics in this play; he deserves applause for the same and hats off to him for thinking innovatively. The most beautiful thing about the play is the way the stories have been narrated; even a layman can understand it."

When asked Gulki about the buzz of her comeback with a new show, she says, "I have been approached for a new show but as of now I am still in talks with them; nothing is final as yet."

We wish Gulki all the best for her play and future endeavors!

shreechana 6 years ago Watching various performances of Gulki in various TV shows Crime Petrol , Phir Subah Hogi, Nanda Parinday, its obvious that she is among the better actresses on TV.

However watching her power house performance in "Ghashiram Kotwal" on stage one discovers the tremendous stage presence the petite girl has.

Having witnessed her effortless performance, I can not help wondering if she is going to be the "Smita Patil" of this generation.

7 years ago Congrats and good luck on your upcoming play Gulki! Looking forward to seeing you on the telly again soon!

7 years ago Hi gulki how r u , best of luck for ur play
N also happy new year 2014 :)
may ur beautiful dreams come true

+ 2
7 years ago All the best Gulki Joshi for future ventures and waiting to see you on TV again.

7 years ago Gulki, congratulations on your new play and hope you will return to the small screen soon. Miss you as Sugni, you were very good.

7 years ago Congrats Gulki. Wish you all the best on your play and hope that you come back on a new show soon

+ 2
7 years ago Glad to know that you are having a fantastic experience doing theater these days...all the best !!

Waiting for your come back on small screen !!

+ 2
7 years ago Happy new year gulki aka sugni.We miss u after PSH serial.I wish u will be back again onscreen with a cute smile and a rocking dance or dialogues.

JohnQ 10 years ago Anushka as usual, looks ravishing in the trailers. Movie is going to be released on Feb 11, 2011 just in time for Valentine's day.