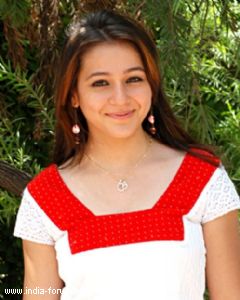 Priyal Gor has recently debuted on the big screen with a Punjabi film Just U & Me. She was last seen on television in Sony TV's show Dekha Ek Khwaab and now will be doing a cameo in Life OK's show Ek Boond Ishq.

Talking about her role, Priyal says, "This is a cameo role but I don't know that how long it will stay in the show. I've not been told about the time period. My character's name is Radha and with her entry in the show, there is a big twist in the tale."

Priyal says that her character will be introduced in the show to prove Mrityunjay innocent, "Radha's life was destroyed by someone and she was raped too. In the blame game Mrityunjay (Viraf Phiroz Patel) is put behind the bars for my murder. I mean for the world I'm dead but still alive and have come to prove the innocence of Mrityunjay. Now what happens further is something to watch out for."

"Whenever I would take up a show, it has to be the lead role. I don't mind if the channel kills me in 20 days too as I know that this is a short role. This role may continue for three months too and could end in few days as well. It all depends on the production house of how they want to take the story forward. For now I'm enjoying my stint in the show Ek Boon Ishq," she concludes talking about taking up lead roles in future.

We wish Priyal good luck for her cameo role in the show Ek Boond Ishq!

Sehru_life 7 years ago Hope the news tht Viraf Phiroz Patel is staying back in Ek Boond ishq is true :))))

Divya429 7 years ago Hope Viraf is nt quitting! the track is exactly as we need,EkBoondIshq Rocks!!

misty85 7 years ago If Viraf doesn't quit the show it'll be awesome... Story is going great.

Simran114 7 years ago At least there is some positive news, no love triangle.