View Profile
BollyCurry has a special treat for its fans. We recently caught up with a celeb, who has not worked with some of the biggest stars in Bollywood, but has rapidly climb the ladder of success with every passing film himself, making his name much-sought after as well.
Cutting the tension short, BollyCurry gets candid with the one and only, Sonu Sood! Read below to find out what how that actor got his big break, who hisfavoriteco-star is and how fans compelled him to take his shirt off! 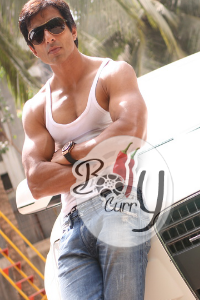 Since your debut, you have worked both in Bollywood and in Southern films. What do you feel is the biggest difference between the industries? Which one was more challenging for you?
I think the industries are getting to be more similar in terms of content and technicians with the huge crossover now - directors, camera people, fight masters etc. The audiences of course have their own preferences - while everyone likes a good story, audiences in the South have appreciated bolder cinema, be it action, or music and dance etc. That used to be there in Bollywood films in Mr Bachchan's time, then it slipped away a bit, but now is making a big comeback with films like Dabangg and Singham and even my next film,Maximum, which I personally love.
You have worked next to Bollywood biggies such as Hrithik Roshan, Salman Khan, Akshay Kumar, Abhishek Bachchan, etc. How has the experience been and who would you say is your favorite co-star?
I get along with everyone really well, and it would be unfair to choose favourites. They are all good friends and great actors. The experience has been fantastic. It's always nice to be in the company of someone who is very talented at anything and it's one of the things I love most about the industry - the diversity and unique talent that abounds.
From the numerous characters you've played over the years, what has been your favorite role till date and why?
I enjoyed my role in Arundhati for which I won the Santosham and the Filmfare and the prestigious Nandi award. I also had fun as Chedi Singh.
How did you end up in the Southern film industry hailing from a north background? Did you know the language or was it all on-the-job learning?
I had done some ads etc. when I was in college and was offered a film down South by a producer who saw my portfolio. By then I really wanted to act, so took the break. I learnt the language on the job and my mother really encouraged me in this effort. I have never regretted the decision, and South Indian Cinema remains an integral part of my focus even today. 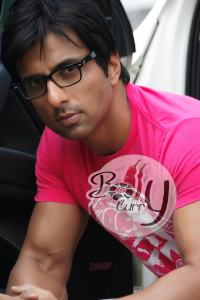 We hear you have a huge fan-following down south. How does it feel to be loved so fanatically? Any interesting fan incidents to share?
It's really touching, that fan following. It means a lot to me because these are the people who watch my work and appreciate it and stand by me. It is the most important thing and the best high, when the audiences you make a film for enjoy it. It's better than any award. There are so many incidents - there was this one recently in Hyderabad where I was shooting for a film and a mob gathered, and this guy from the crowd was shouting how he'd built his body after seeing me and getting inspired. He kept asking me to take off my shirt so he could actually see the cuts! Soon the crowd was chanting along and I had no option but to give in, and the crowd just went crazy! It was fun! I think its great people get aware of the importance of being fit and do their bit for it!
When you were approached Dabangg, did you expect for it to become such a big success? How did it feel winning your first Bollywood award?
I loved the script the first time I heard it. It was fantastic! Like I said to me audience reaction is the biggest award. The fact that my films have been so commercially successful is the biggest high. Beyond that is the fact that I got the awards. That is also something that feels very nice. That people in your peer group, the industry bodies, have recognised your work.
The sequel of Dabangg is under production. Can we expect to see you in the film? If yes, would you tell us a little about your role?
I'm not doing the sequel.
What other upcoming projects will we be seeing you in? Which one are you most excited for?
I'm really looking forward to Maximum. It's a gritty action thriller and I love the script. The action is fantastic and the plot is gripping. I hope audiences enjoy watching it as much as we've enjoyed making it.
We can't let you get away without talking about your personal life! How do you juggle crazy shooting schedules and taking out time to spend with your family? Any particular activities you guys always do as a family?
It's been really tough in the last few weeks. Im shooting for two films simultaneously. But my family's very supportive and that's what makes it work for me.
And there you have it folks, words from Mr Sood himself. BollyCurry thanks him for his time and wishes him all the best withMaximum. Stay tuned in to see who sits on the hot seat next!