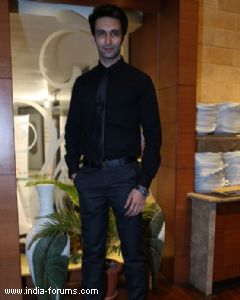 Nandish Sandhu was last seen in Zee TV's Phir Subah Hogi is all set for a comeback on television. The actor is very ecstatic about his upcoming ventures lined up for 2014.

Nandish is happy about his comeback on Television as he will be seen on-screen after quite a long break and says, "Yes it's true that I'm coming back on television but at the moment can't talk about anything. The shoot of the show is yet to start and may be by end of this month we should begin shooting. I cannot reveal any details of the same as of now," chirps Nandish.

Having played positive roles in many shows, Nandish is looking forward to play a different role this time on TV, "It's going to be a new start for me. I'm done with playing positive roles and portraying a character of a good husband on-screen. Thus was holding myself back and was looking around of what's going on in the Television world. Now that I've got a good offer, I'm all set to return," he says.

So are there any plans of making it into Bollywood? "To be frank, I'm in talks with few people but it is still on verbal terms only. I haven't signed any contract. So pray for me that things turn out to be positive," speaks Nandish.

Talking about his personal life as it was reported that his relationship with actress Rashmi Desai Sandhu has hit the rock, Nandish clarifies the same and says, "Well, I have not spoken about my personal life and will never do so. I respect my wife and will not make this issue public. Both of us have kept our personal lives very personal and will sort out our problems. You can pray for that everything between us goes fine."

Lastly Nandish concludes this conversation by conveying his message to his fans, "I just want to tell them that this time when I'm doing TV is neither for my family nor my mom wants me to do it but it is for my fans only. I had been getting lot of messages and thus I've decided to come back for them."

We wish Nandish all the very best for his comeback!!

7 years ago we all r so so happy that u are coming back..waiting ..u shud be in a pivotal role..god bless u..

purvi_tvstarlet 7 years ago nandish sandu has juicy lips and hot and sexy body . would love to marry him .

nitillu 7 years ago I just hope dat u get d best of offers.n bag a good role..hoping to c u soon on tv

7 years ago All the best Nandish. Can't wait to see in new show

7 years ago Hope to see u soon. But plz select good shows. Dont want u to do anything like phir suabh hogi.
All the best :)

7 years ago All the best for ur future projects Nandish Sandhu. U r really a nyc guy in real lyf too. Such a wonderful and awesome actor u are..

7 years ago Wowww.. it's really really happy news..
Hope to c u in good show..
Best of luck Nandish..
U r such a wonderful actor