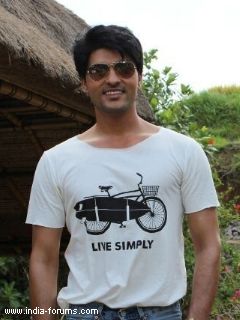 Summer is here and the rise in mercury has made everyone start feeling the heat. Our TV celebs too are not spared and they follow some tips to take care of their skin and health during summers. TellyBuzz speaks to your favorite celeb to know more about their summer choice and the tips they follow to stay cool during summers.

Today we got in touch with the cool hunk of television Anas Rashid who essays the character of Suraj in Shashi Sumeet Mittal's popular show Diya Aur Baati Hum on Star Plus. Here's Anas sharing about his likes and dislikes about summers along with giving tips to his fans.

Yes, I like summers for Falon Ka Raja Aam.

Summers are meant for... Vacations; especially going to hill stations like Manali, Shimla, etc., wearing short dresses, sleeping on the terrace and abusing electricity department because of the shortage of electricity during summers.

The perfect summer wear for me is... Pathani Kurta or Pathani suit.

Shooting during summer is... Challenge; it's an exam for me. I remember that we started our shoot for Diya Aur Baati Hum from 21st June in Bikaner when the heat was at its peak there. It becomes a challenge for us to shoot in the heat because while shooting in the heat, we also have to take care of the fact that we must maintain the mood of our character in the scene.

Things I carry along during summer... A bottle of water, Nimbu pani, an umbrella and a handkerchief.

How do you take care of your skin?

I drink lots of water and keep washing my face from time to time. I also apply tomato on my face.

My fitness regime during summer is... I eat less and drink lots of water.

Vmaa 6 years ago all the best for you
and keep rocking!!!!

Rosy.L 6 years ago Wow Anas ! Cool place to be in summer for a cool person like you !! Good day to you !

umadabh 6 years ago Anas Rashid Wish u everything great Success :)

Ranjeeta_ 6 years ago Anas Rashid, your choice is excellent, thanks for your tips, you have always rock on TV, keep it up :)