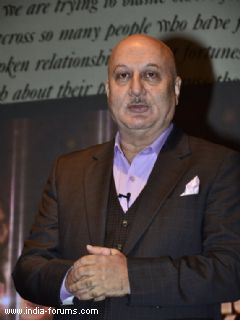 Veteran actor Anupam Kher who has acted in en-number of films is all set to explore his hosting skills in a TV show titled as The Anupam Kher Show - Kucch Bhi Ho Sakta Hai.

Anupam Kher is not new to facing the camera as he has hosted few shows like Say Na Something to Anupam Uncle and Sawaal 10 Crore Ka. In conversation with TellyBuzz he talks in detail about his show, experience in interviewing different celebs, their inspirational stories of life, ideologies he follows in his life and more...

In the show you have interviewed many stars did you face any difficulty while interviewing the celebs?
I am people's person. I love people, I know them and I understand them. My idea was not to ask any question which makes them feel uncomfortable, when you will watch the show you will notice that how openly celebs have spoken, they were open to answer my each question. I didn't ask them any controversial questions because I was personally not interested in it. I didn't ask them any such question which would hurt them; my idea was to inspire the country by telling them these peopleâ€™s story.

You are a producer as well as host of this show, was it easy or difficult for you to manage both?
I have a wonderful team. We have hired the best people and we paid them well. There is one simple idea I believe in, if you pay people well they will work efficiently. I did not want to haggle, I told them to cut down on my price but pay them well. I told them that we will not do this show like other shows; we all share a great bonding with everyone.

There are many actors who are turning producers what do you think is the reason behind this?
Everyone wants to be an entrepreneur; everyone wants to widen their horizons. We make our life one dimensional but I feel life is multi-dimensional. We always take an easy path and we mold it in one way. When a 18 year old teenager says "This is the way I am"  it is the worst thing to say, it means he has stopped growing in his life I will never say this is the way I am. And also I am not scared of failure, when you are not scared of failure everything becomes adventurous for you.

You personally know many Hollywood stars are you thinking to bring them on your show?
Yes, I would love to bring people from Hollywood but for that we might have to do the show abroad. I canâ€™t expect Colors to pay for their ticket. But I would like to bring the people whom I know Mr. Robert De Niro, Jennifer Lawrence etc. 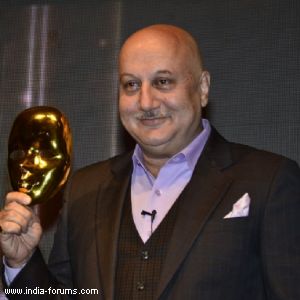 We have seen in the promo you are carrying a mask what is the reason behind it?
People's perception about actors is that they wear a mask but this is not true. We prejudice and per-interpret things related to celebs as we don't know them well. So we are going to show another side of celebs in the show.

Popular actors like Amitabh Bachchan are coming back on television, according to you what could be the reason behind it.
That is the power of television, where television reaches no media does.

You have hosted â€˜Say Na Something to Anupam Uncleâ€™ earlier so how was the experience doing that and what do you expect from this show?
I hosted that show with kids but I treated them not as kids but as adults and that was the best part of the show.  In this show I have treated celebs as my best friends. At one point, celebs didn't realize that they were in a studio or they are surrounded by the camera, I think that's the magic of this show. I am very thankful to Colorsâ€™ team and working with such amazing people.

What makes this show different?
The show is unique in its own way, it is not an interview but it is a conversation. I was shocked to know Shah Rukh Khan's real name is Abdul Rahman. You will not find any kind of gossip in the show; the atmosphere is real, where actors have narrated the stories about their life. I have not promoted a single film in the show because if I would have promoted the film then it would have intended of promoting their film.

Is there someone who could interview you?
I think my wife Kirron Kher can do a great job.

If you interview Kirron Kher will you brief her?
No I won't brief her, she may ask the list of questions I want to ask her but I will refuse for it. We may indulge into fight because of it. 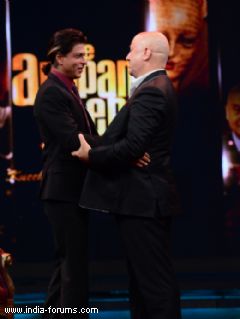 What made you to host this show?
I think at this age I can host a show as I am capable enough to understand stories of people's life.

Are you satisfied by where you stand today?
Yes, I am very satisfied, several people come in Mumbai to try their luck among them only 1 percent people get a chance to fulfill their wish and I am among that 1 percent. I never thought I will come all the way from Shimla and will do 480 films in three years, by God's grace I am actively involved in running a school, I write books etc. Nowadays criticizing and being unsatisfied has become a fashion. Meri life bachchan jaise kyu nahi hai mere life Ambani jaise nahi hai but ye bhi to socho ke kitne logo ki life mere jaise nahi hai.

From where do you get this positive energy?
I get positive energy from life and people. I always see positive side in people. In fact Kirron sometimes fights with me and ask why do you always see the positive side? I am interested in people's life when someday my driver seems upset, I advise him to cheer up his mood first and then drive. It is just my way of looking at life.

Personally whom you would love to interview?
I want to interview myself once because I feel no one knows me better than me. I want to see how honest I could be to myself. I would ask some difficult question to myself while interviewing.

Well said! We wish Anupam Kher all the best for his show!

kuchiki 6 years ago Anupam Kher Sir is really amazing. He always shows positive side which inspires me a lot. He makes things which changes perception of people in good way. He tricks in a way that bad influence and negativity disappears. I m eagerly waiting to watch his show.