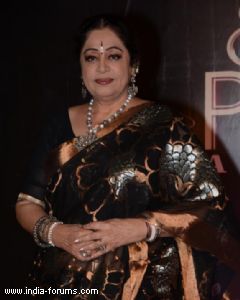 Actress Kirron Kher, who won the Chandigarh Lok Sabha seat as the Bharatiya Janata Party (BJP) candidate, says even though her duties will keep her immensely occupied, she won't give up her role as a judge on TV reality show "India's Got Talent".

When asked about her future plans, Kirron said: "It's all up to the high command. One thing is for sure - I won't give up doing 'India's Got Talent'. I enjoy being a judge on that. No matter how, I'll find time to continue doing that. The rest of my schedule will be worked around the requirements in Chandigarh."

She says she's gone through a 'crazy whirlwind' in Chandigarh.

"I was informed about my candidature barely a month before elections. I rushed to Chandigarh where we lost precious time because of the local resentment over my candidature and the protests," she said.

After that, it was complete madness for Kirron.

"My life was taken up by road shows, election rallies and campaign speeches. I was clocking four to five hours of sleep every day. The rest of the time went into attending rallies.

"For each one I had to give a completely different speech because the audience profile at every meeting was different. So, very often I found myself giving different speeches within half an hour of one another."

Kirron was completely taken aback at the volume of media coverage in Chandigarh.

"There are innumerable television channels and papers, all very aggressive and not willing to take a no for an answer. Handling all that media amidst unending road shows and speeches was tough on my schedules. But I am used to the media."

The actress says she has been living out of suitcases for the past two months.

"I've just been throwing my saris into suitcases and traveling. I'll now have to divide my time between Mumbai and Chandigarh. I have a home in Mumbai which needs attention.

"But Chandigarh is also home, specially now. Luckily getting to Chandigarh is no problem. It is only a three-hour drive from Delhi. I don't think it would be a problem at all," she added.

Looking back, Kirron gives herself a favorable report card.

"I was completely new to politics. Here I was thrown into the biggest political event. I think I managed to conduct myself with dignity and grace in spite of the provocations."