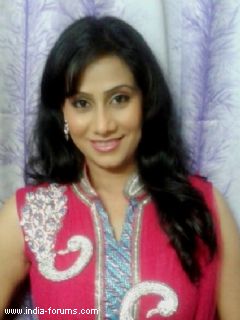 Komal Sharma who is known for portraying typecast roles in TV shows recently debuted on the big screen with the film Jal. The actress, who was recently seen in Shashi Sumeet Mittal's popular show Tumhari Paakhi on Life OK, is on cloud nine as she is being praised for her role in the  movie Jal which is getting good reviews from the audience.  Komal has played a prominent role in the movie and was very excited to shine on the 70 mm screen.

TellyBuzz spoke to the actress to know more about her experience of acting in the movie and about the character.

Talking about her character in the movie, Komal told us, "I have played the positive character of Lajo in the movie who is shown to be Ravi Gossain's wife. Lajo is a simple girl and she is little possessive about her husband like most of the village women are. The movie is based on the theme of 'save water.' I had given an audition for this movie and they wanted a simple face for playing this character. I got selected and then I was waiting for this movie to hit the theaters. When I first saw myself on 70 MM big screen, I felt very awesome to see myself on the big screen and got tears in my eyes."

Komal's first movie experience went very good as she observed and did her homework well to get into the skin of the character. Talking about her shooting experience, she told us, "It was my first movie and it was an awesome experience of doing this movie. Our director Girish Malik did a great job. I prepared myself well for this movie. I didn't know anything about the camera work done in the movie and other things before I signed for this movie but later I prepared myself well for this role. I observed few village girls about the way they speak, their body language and everything. Initially I was finding it hard but later everything went well."

Acting in this movie, has been a challenging experience as well for Komal, as she states, "We used to shoot in the scorching heat and we have to be without any make-up. We used to shoot in the deserts and used to sit on sand for scenes which was very difficult for us. The production people used to call some local village girls every day with whom we used to interact and know more about their lifestyle."

The movie has got good reviews and Komal is getting appreciated for her character as well. The actress who feels content about playing Lajo in the film shared, "I am getting appreciation from so many people. They liked my character and I am happy that people recognized me as Lajo. I am happy to play such a prominent character in my first movie. The movie has got good stars and now I wish that this movie would make way to the Oscars. I feel that it's the best work of mine till date."

Priyanka, Madhuri, Ayushmann, Ali and other Bollywood celebs root for ...

+ 2
10 years ago i'm not a big Akshay fan..but am seriopusly glad that hes hosting..
i dintpretty much find the last season interesting without him :P except the pleasure of watching some the studs perform lol

10 years ago haiye! mera akshay!!
yay to seeing him on the tv screen!

+ 6
10 years ago Oooh...I'm so happy that AK is back with KKK. It's nothing without the Khiladi himself. Can't wait for it to come on air once again. I just love it and AK.

+ 4
10 years ago brilliant - darling .. so happeee you are gonna host it.. there is no K in the kathron.. if the Khiladi isn't there. Love uuuuuuu

+ 3
10 years ago wow Akshay is back with Fear factor: KKK season 4! that awesome looking forward to the show wish him & his family a glorious time in South Africa