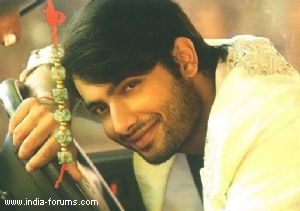 Sharad Malhotra who was last seen on Zee TV's Banoo Main Teri Dulhann wishes to come back to small screen. Though he will continue with his Bollywood dream but doesn't mind hosting a show on TV at the same time too.

When asked Sharad about coming back to TV, he replied saying, "Yes, it's true but I cannot divulge anything as of now."

Sharad is all set to shine on the Big screen as he has just finished shooting for his film 1,13,7 - Ek Tera Saath and has been getting offers for TV too and says, "I've just completed the shoot for my second film 1, 13, 7- Ek Tera Saath and there are offers from TV for some episodic, though nothing is finalized as yet. Actually I get a lot of request on social networking sites where they ask me to come back on TV. So if I get a good role, I don't mind taking up a good role."

Sharad says that he wants to portray a grey character in a TV show and would like to host a reality show in future, "I want to play a grey shade in a TV show. To be frank this kind of roles are very much in demand today on TV and audience also likes it. Thoda positive and thoda negative is a good combination. Also in such roles you have lot of scope for performance. I'm open for all kind of roles and don't mind hosting a reality show as well."

He further adds, "Today the saas-bahu scenario on small screen has changed, there are not many shows focusing on these particular issues. People are open to more realistic shows and also TV is getting bolder and exciting with its new experiments on the concepts."

When asked him what kept him busy all this while, Sharad says, "I was busy doing commercial ads and shoot of my film. I'm in talks with people for my third film as well but again I'll not say anything till things materialize."

Sharad is happy to see Divyaka's comeback on TV and says, "I'm very happy for Divyanka Tripathy as after a long time she is coming back to fiction show and that too with Ekta Kapoor. I really wish her all the best and I'm sure audience will love this show. I wish I get to work with Ekta Kapoor one day."

Well Sharad, your fans are eager to see you on-screen too. So we hope that you come back on TV soon!

omi523 6 years ago Love your acting as sagar then amar. Praying that you comeback to tv and rock it again.

Btw i too want dat..hehe
love yuh both Sharad Malhotra and Divyanka Tripathy

--Amulya-- 6 years ago I think they are a couple as it seemed like he was complaining that she was not having time for him... they make a really cool pair

DivianTanz_Divz 6 years ago Sharad, you should come back with Divz again. We are dying to see that chemistry.

MSN_Vanny 6 years ago OMGGG!!!! One of my favourite shows!!!! It has been years, it feels nostalgic!

Siddhi_ 6 years ago Sharad, you are such a good actor.
Really miss you on TV, would love you back onscreen
All the best for your movie :)

BinKuchKahe. 7 years ago Its nice to see Sharad-Divyanka still so close after so many years.
Does anyone know if they confirmed whether they are dating?

LegolasGondolin 7 years ago man its been years since BMTD.. that was my first serial ever.. love u both sharad and divyanka