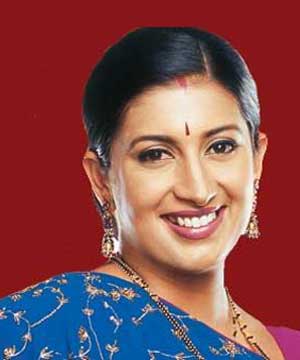 Actor-turned-politician Smriti Zubin Irani who rose to fame as dutiful daughter-in-law Tulsi on Star Plus' popular show Kyunki Saas Bhi Kabhi Bahu Thi on Tuesday said she will put up the best fight against Congress vice president Rahul Gandhi and is confident of winning the Lok Sabha election in Amethi.

It was decided on Monday night that Irani will be the Bharatiya Janata Party (BJP) candidate against Gandhi from Amethi constituency in Uttar Pradesh.

Speaking to Times Now, she said that irrespective of Amethi being a Gandhi bastion for years, "people have not received the benefits of development in the constituency, which is a national shame".

Irani said now the people of Amethi are wondering about the chances of change and development as BJP prime ministerial candidate Narendra Modi will come to power and the Congress will sit in the opposition.

Reacting to the comments of the Aam Aadmi Party's candidate from the constituency Kumar Vishwas, Irani said it will be a fight only between the Congress and the BJP.

"Vishwas has a history of being disrespectful towards women. I do not expect an iota of respect from him," she said.

Vishwas earlier said the people of Amethi have decided and it did not matter whether a Pakistani, or an Italian or an Irani contests the election.