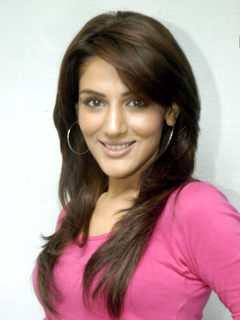 Simple and sweet Sudeepa Singh is back as Rani Pari with SAB TV's show Baal Veer. Sudeepa who rose to fame with Sony TV's Kabhi To Nazar Milao, Sudeepa is returning back to TV after a hiatus. We got in touch with this good looking actress to know more how did she utilize her time, her show and much more...

Sudeepa is happy to come back to the TV again and wants people to appreciate her through her acting ability, "Yes it's been a long time since my last show Ardhangani - Ek Khoobsurat Jeevan Saathiwas was on air. It was in 2008 but after that I got busy with the ad shoots and several other projects. I was getting offers but did not take any as I don't want to be just a pretty face on TV but also want people to see my acting ability. Baal Veer has given me that chance," states Sudeepa.
Elaborating on her busy schedule, Sudeepa says, "I had signed a contract with a company for a year and half and thus was traveling with them for the ad shoots. I've done lots of ads in abroad, London, Saudi and even Pakistan. Also I did a show in Pakistan and few Punjabi films as well. For 2 to 3 years I was just doing all this. Though I always wanted to return back to television, I was waiting for a nice project to come my way."
So is there is a reason of doing a fantasy based show Baal Veer? "Firstly it's a very popular show and secondly its based on kids. I love kids and thought that by doing this serial, it would be a good gift for my cousins and nephews too. This show is not taking too much of my time and so I can work on other shows too," she says.
Sudeepa is willing to play the character of a bahu or a beti, she says, "Well I really like Qubool Hai and do watch it. I like the girl in the show and the best part is that she is playing her age which is rarely seen in telly world. I would love to do such show or character. But this doesn't mean that I'm not going to play a bahu or beti."
"I'm very choosy when it comes to signing a show. Beside a good character, story main bhi dum hona chahiye (storyline should be powerful). I was getting maharani types character which I didn't wanted to play. Even in Baal Veer I'm Rani Pari but this show is different and now kids are eagerly waiting for the new twist to unfold with my entry. So I'll wait for a month and see how my character is shaping. I love this show and is happy to be part of it," concludes the actress.

We wish you all the very best Sudeepa!
0 Likes

superfan1 5 years ago It's wonderful to see you as Rani pari great job. Best wishes to all.. The show Baalveer must never end.. Love u all!

riddhi1206 6 years ago surbhi rockz
i loved that she mentioned otherwise manier times they like bt dont mention it
anyways qh is awesome
following it frm starting n i can she is right coz they show an amazing women thing! love it alot

available1 6 years ago @RoseWine
she is not the girl u r talkin abt..ananya was played by actress kanchi kaul (Shraddha of meri bhabhi)
they both luk a like..nd pls dont compate sudipa wid Kanchi kaul as kanchi is far more better than sudi

-RohitMaxwell- 6 years ago aww nice seeing you like Surbhi on Qubool Hai..