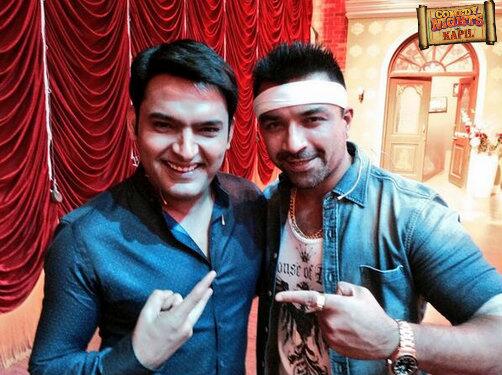 Known for his pally behavior and typical tapori language, actor Ajaz Khan will be seen making the audiences laugh by making an appearance in the Colors' laughter based show Comedy Night with Kapil.

As Ajaz was last seen in a daring stunt based show Khatron Ke Khiladi Darr ka Blockbuster, he now wants to explore his skills more on TV and thus will be seen entering in the comedy show as a thief named Romeo.

We got in touch with Ajaz to know more about his experience on the show and he said, "It was a mind blowing experience to work with such a great person, the best part about Kapil Sharma is that, he is not an insecure actor. I was really overwhelmed when Kapil gave me so much respect and invited me on the show. Basically Kapil invites those people to do acting along with those who has a good comic timing and can make people laugh. Thus he felt that I can be a part of his show and I also agreed to make an appearance."

Talking about the opening episode, Ajaz avers, "The act will be that Kapil has opened a bank and people have deposited their money. So as he has a huge amount of money in his bank, he will decide to make a plan to rob his own bank by hiring a thief, but instead of his person the real thief will come and will rob his bank and I am that real thief.My name in the show is Romeo."

"If I get a chance to shoot again for Comedy Nights with Kapil then I would love to be a part of it," he concludes.

TellyBuzz wishes Ajaz Khan all the best for the show.

Will be looking forward to tthis plot

Yuvika_15 6 years ago kapil is a great comedian

all the best 2 ajaz... he was very entertaining in BB7

JniISHRA83 6 years ago comedy nights with kapil is a wonderful show..Kapil sharma is doing a fantastic job...Ajaz is a useless man...I hate him...