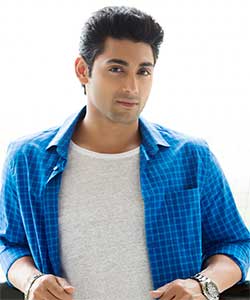 Ruslaan Mumtaz who is seen in Kehta Hai Dil... Jee Lee Zara on Sony TV as Dhruv who is young, dynamic and full of life,  is very much similar in real life too.
Being the son of famous Maharastrian actress Anjana Mumtaz, he has no airs about the same and is a very grounded person .
TellyBuzz had a quick chit- chat with the dashing actor to know about his character in the show, the response he has been getting from his fans and his relationship status.
When asked Ruslaan about the response he has been getting from the people for the show Kehta Hai Dil... Jee Lee Zara, he said, "I am loving the response that people are showering upon me. Its unbelievable to have such an overwhelming response from the people. Since they know me from my movies time, it has become easier for me to connect with them."
So what are Ruslaan's reel and real life attributes?  "I would say, I am very similar to the character of  Dhruv which I am playing in the show. I am also very immature in my real life. I also take sudden decision, so I can very well relate to the character."

"I feel I am way too immature to be in a relationship. I have lead a very care free life and now I think after doing this show I feel more responsible. I don't want my mother to work as I am all ready to take up the responsibility. I wasn't this way earlier but I was more of a care free person and I was not ready to take up the responsibility at all. I was commitment phobic but now I am all up for commitment," he added.
Furthermore, he gets little more personal and spoke about his love life, "Well, I have had flings when I was young. I too had girlfriends but now I want to feel love and this time I won't date any one till I marry that person and get committed. I now want to settle in life, I now want to take up responsibilities and I am turning into a matured person now," says Ruslaan.
Speaking about his passion for acting Ruslaan says, "I am very rebellious in nature. My mother always said that I can't act. She never wanted me to go through the struggle that actors go through, so she made me strong and bold. But I wanted to prove to her that I can act and here I am acting in Kehta Hai Dil... Jee Lee Zara. I did whatever I could without taking her help and without getting her into the picture."
When asked Ruslaan about his alternate career plans apart from acting he said, "I am a student of finance and had I not been an actor I would have been a stock broker. I wanted to act so here I am in TV industry as an actor."
Ruchita Mishra
Featured Video

5 years ago It is entertaining movie and all star cast of the movie play a fantastic role in the movie and it is full of comedy movie and if you are a fan of Ajay Devgn than go and watch it.

+ 2
8 years ago nice article
oh i saw his mother in movies but had no idea she is his mom !!! she is very talented so he is too talented !!! nice work he is doing on jee le zara
best of luck

He & Sangeeta is sharing good rapot in serial.

8 years ago You are outstanding Ruslaan...Keep it up!!!!

8 years ago Ruslaan is awesome in all the scenes...hope this show does well and he gets all the awards n recognition

+ 3
8 years ago i am liking his more subdued "worried" personality i.e jealousy over Saachi

he was way to chipper and hyper before

+ 5
8 years ago Ruslaan Mumtaaz, doing a great job in JLZ, love his chemistry with Sangeeta and the 2 grandmas!

867swan 8 years ago After a long time I am liking any male lead of any daily soap...while watching the promos I was not much curious, but Ruslaan has proved me wrong...he has got a tailor-made role and he's playing it so perfectly...so many emotions in one face...great job man, you have a long way to go.