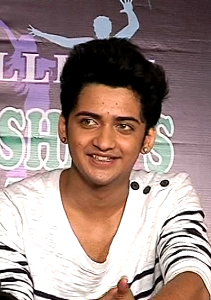 This seventeen year old much excited actor who recently joined Channel V's Dil Dostii Dance gang speaks with TellyBuzz regarding his excitement and joy of being a part of this much loved show by the masses, his journey from Dance India Dance to now and a lot more. Read on to know more about him -

How is your journey till now from dancing to acting?

I have not shot much till now. But from whatever I have shot it is clear that acting is not easy. Saying dialogues sitting in front of the mirror in a room is easy but averring dialogues when you have so many people looking at you is not that easy. When it comes to dancing, yes I do have confidence but speaking about facing the camera and acting with complete emotions and getting the audiences involved, giving out realistic emotions and how much depth does acting in itself have is something that a person gets to know only when he/she gets involved in this industry. But I am fortunate enough that I have got such an amazing and helpful cast. The entire team of Dil Dostii Dance is always ready to help all of us. So I just hope with their co-operation and my hard work, I can impress the audiences.

This is your first venture in mainstream acting. Is it too hard for you to get into your character?

I did act for Marathi theaters earlier when I was in sixth grade. But that is not helping me in anyway. Dil Dostii Dance has altogether a different genre.  Theater was way too different than what I am doing in Dil Dostii Dance. Channel V is a youth based channel and they depict the reality and not scenes and concepts that are larger than life. I love the cast, the storyline and above everything I love the people here.

How did this show come your way?

To be very honest, all this was a dream to me. I had never thought in the rarest of my dream that I will be doing a show like D3. I still remember two -two and a half years back I used to watch Dil Dostii... and they were so good especially Swayam (Shantanu Maheshwari) and Reyansh (Kunwar Amarjeet Singh). To get into acting has always been my dream but being a part of such a popular show was something that I had genuinely not expected.

Who is your favorite amongst the entire star cast of D3?

Dil Dostii...has a talented bunch of actors and I love them all. But in personal I like Swayam (Shantanu Maheshwari) a lot.

We last saw you in Zee TV's Dance India Dance Season 4 and now we are seeing you on D3 after a long time. What were you doing meanwhile?

I used to live in Pune then. I came to know that there are auditions happening. So since then I started giving auditions. I did a Marathi reality show 'Dance Maharashtra Dance' and in the same show I became a finalist. Later exactly after a year Dance India Dance happened and I became a part of that huge platform. And for D3, I think it is my sheer luck that I got into such a show where I have got to fulfill both my desires of dance and acting.

You are in HSC now. So how are you managing your studies along with the shoot?

I know that is going to be a bit difficult. But I will have to do it. For now I am just trying to figure out things as everything is so new to me. In some days I will manage my studies during the free time I will get.

How well will you think you will be cope up with the already present cast?

I have always loved Dil Dostii... and I had never thought that I would get an opportunity to even meet them. So yeah, I am really looking forward to work with all of them. The present cast is been doing since past three years and each of them have a unique aura and an unmatched personality. We are just trying to learn from them how to deliver dialogues in front of the camera, how to present yourself on screen so that people get impressed by you.

Do you think Dance India Dance was a turning point in your life?

Actually, we can put it as every point in your life is a turning point. It depends upon you whether you want to take a U-turn from that point or go ahead.  There is no doubt that DID is a great platform and I have not seen anyone getting so famous just by dancing in a limited period of time of four months. Dance India Dance is untouchable and it has its own charm. You get your own contacts and the best thing is people start knowing you and support you in all that you do.  If I wouldn't have proven myself as a dancer on the stage of DID, I do not think today I would be standing here in the Cinevistaas studio and giving you this interview.

Talking about the show, what kind of character will you be portraying and what are you expecting from the show?

I will be essaying the character of Raghvendra and in one word to describe my character is - A Total Flirt. Besides being a flirt, he does not like fighting or arguing with anyone.

I am just seventeen and I have really experienced and good actors here. So I am not expecting anything from the show. All that I am expecting is from me. I am hoping and trusting in me that whatever challenges this show and my character will give me, I shall do it successfully.

+ 2
6 years ago keep up the best in you smile... love u kunwar amarjeet singh

6 years ago shantanu maheshwari rocks... he is d best

6 years ago Luv u Shantanu Maheshwari..!!
u rock

+ 3
6 years ago Love you Sumedh Mudgalkar!! waiting for ur entry and Amar is a charmer!! :D
Keep rocking Kunwar Amarjeet Singh

6 years ago Shantanu Maheshwari u r the reason i watch D3 :) Keep rocking :)