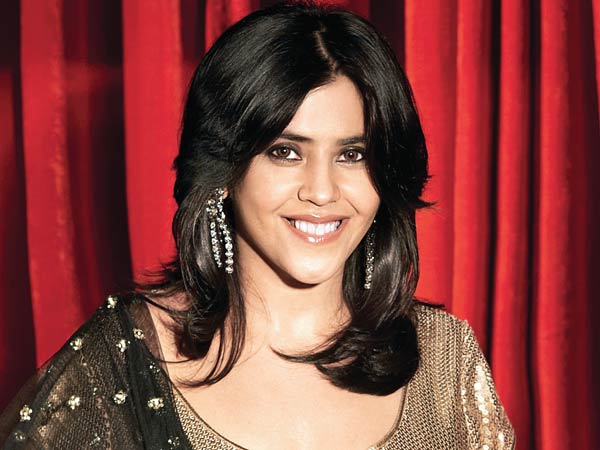 After launching Kumkum Bhagya a popular show on Zee TV the daily soap queen Ekta Kapoor is all set to spread Aashiqui in the hearts of the audience with her new show Meri Aashiqui Tumse Hi on Colors.

In conversation with TelllyBuzz Ekta talks about her show, new female actress in the show and more...

When asked Ekta how differently she would portray the story because there are many love stories based shows on TV these days, she says,  "I believe in detailing, even if the story is repeated. I try to give it a new touch to the story for example take RamLeela it was a normal love story but people still liked it because there was lot of detailing created in Ranveer Singh's character, Deepika Padukone's character. It is like tea or sandwich, all make sandwiches but you may like only one sandwich wala because there must be something different in his sandwiches. I think it is more tougher to be different after being similar. It is actually a challenging job to create a world and involving audience in your created world."

As there were reports that Meri Aashiqui.. has been adapted from Emilie Brotnie's Wuthering Heights novel so when asked Ekta about the concept of the show she says, "No it is not, as I said before I believe in making similar thing in a different way. Human beings are nuts we easily get influenced by things coming across in our life sometimes we get highly influenced and we actually land up copying but sometimes we keep it as base and try to bring something different from it. The story is about two families poor and rich staying in the same house and the rich family is not realizing the value of poor family."

Any specific reason for launching a new face in the show? Ekta says, "We took auditions all over India and we found Radhika Madan perfect for this role. Before starting the shoots she has been taken for work shops for training as she is a new actor. There was vulnerability required I needed a raw talent and she had that."

We wish Ekta Kapoor all the best of luck for her new venture.

loveyoupreeto 6 years ago Yeh hai mohabbatein is the best show.loving it totally..All the best for your new show Ekta.

.Angel 6 years ago Don't know why some people can't stop bashing her like she is the only one her shows get messed up after sometime.


All other PH ruin their shows so get over it and let her do her thing, at least she didn't kill off a father and bring him back with the same face to marry his own daughter.


She is not the only one who goes wrong or mess shows up every over PH do it as well.

Just 1 thing Bring Pkyek back with ViSu and In Kumkum Bhagya as you are not gonna follow novel exactly,Pls make Purab and Bulbul to end up together,Pretty Pls with a Cherry of top.

Thanks for Giving Us Our Fav Jodha Akbar,My Akdha and PariJat Rules.

Thanks for Ishra and Bringing My Divyanka Tripathy back with Karan Patel.Love DiVan.

And Thanks for Giving Kumkum Bhagya.Love Abhigya and Rabul.Again I love you for bringing My Ever so Dynamic and Awesome Actor Shabbir Ahluwalia back.

Your shows undoubtedly have the best cast,actors and those Magical Jodis.!![8->]

WoZindagi 6 years ago Love her or hate her you just cant ignore her show...indeed she is queen of TV.

Jiyagulabi_26 6 years ago Ekta is ruling telly world these days . Thanks for giving us jodha akber,yeh hai mohabbatein.
I m waiting for meri ashiqui too as promos r promising.

ShadeOfWhite 6 years ago thanks Ekta for giving a show like Jodha Akbar...I am definitely going to watch Meri Ashiqui :)

SushaanManeet 6 years ago Hate or love her show, she has the best of best selections of actors for her shows! Looking forward to the new show!