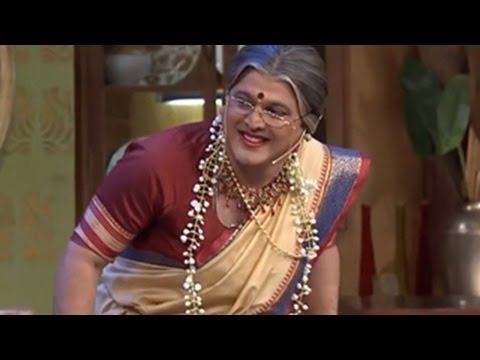 Ali Asgar had already made his claim to fame as Kamal in Star Plus's Kahaani Ghar Ghar Ki. Today he is not only well known for his character of Juju and its magical stints in SAb TV's Jeannie Aur Juju but also internationally renowned as dolly dadi of Comedy Nights with Kapil aired on Colors TV.

In an exclusive chat with Ali, he speaks about his experience with Comedy Nights, handling two shows at the same and what he wishes to do in future.

When asked Ali about how did he bag the comedy show Comedy Nights with Kapil? He says, "Very honestly, I did not want to do this show because I was already doing Jeannie Aur Juju at that time. I had no dates for Comedy Nights with Kapil. But since I knew Kapil and the entire team so well that I took up the show. I thought it is just the matter of 26 episodes, they will end up soon. But never had I thought that Comedy Nights would do exceptionally well not only in India but also internationally."

As Ali is juggling between the two shows, he says that he just takes the shoots with ease and  shoots for Jeannie Aur Juju in the day and Comedy Nights in the night, "I shoot for Jeannie aur Juju in the day and Comedy Nights at night and this has been happening since a year now. It is just because of God's grace that I have been able to handle two shows at the same time. I think Comedy Nights is a show that has totally changed the concept of comedy. It has given a new platform altogether. We have seen celebrities being judges for comedy show but the concept of interaction between the celebs and the audiences is something that has never been witnessed in India. Indeed, hard work pays!"

Ali is quite content to play different characters in the show Jeannie Aur Juju as he says, "Juju is a character that has given me the opportunity to do quadrille role. I do not think the main lead of any show has got such a chance. I think I have set a record of doing four roles together (laughs). Jeannie aur Juju is getting over soon so I am not taking any other show in hand for now. I only want to concentrate on Comedy Nights."

Truly, doing two shows together and getting acknowledged worldwide for both the shows is something that is seen very rarely. TellyBuzz wishes you all the luck Ali!

jadhavv18 6 years ago ali you did well job with rubina i wish jaj not to wnd but time will change.

ashna26 6 years ago You did a great job in JAJ nice with Rubina Dilaik! Wish the JAJ team all the best will miss the show!!

meeyaa 6 years ago I loved the episode of dadi with HemaMaliniji..

But I think he should stop protraying a dadi who wants to kiss everyone all the time...that is sometimes eeks to watch...he can be a conventional dadi one day and a modern one another day...but in every episode doing this sometimes is awful...

-Serene.Rose- 6 years ago we will miss jeannie aur juju.. wish it went on for some more time... Ali is jus superbb as juju. so r Rubina n entire cast! grt job JAJ team.

nikki.171 6 years ago Have seen CNWK a few times.. Must say, Ali Asgar is an exceptional actor! Always has been.

neha333 6 years ago Hatss off to Ali sir..he is awesome...all the best n may Allah always bless him

-GredForge- 9 years ago oh wow she will be better than vidya balan opp. srk in 2 states!!!

arathianil3 9 years ago kajol has also worked with the 3 khans.salman,shah rukh and aamir khan also

-Cskluv- 9 years ago awww congrats asin ...she will be perfect for two states ..