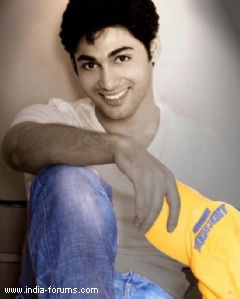 Ruslaan plays Dhruv Goyal aka DV in his TV debut.

"Luckily, I had already signed a few films, so I will be busy with that. But I will miss my fans. The love that the audience have given DV, I am not sure whether my other new characters would be able to receive that or not," said the 31-year-old Sunday on the sets of the show here.

"I will miss TV. So I pray to get a new TV show as soon as possible so that I can come back to TV and meet my fans at their homes," added Ruslaan, who earlier made his film debut with 2007 release "MP3 Mera Pehla Pehla Pyaar".

"...Jee Le Zara" is the love story of DV who falls for a middle-aged woman Saachi played by Sangeeta Ghosh. The show airs Monday-Thursday at 9:30 p.m.

+ 3
7 years ago Good luck to Ruslaan for his future projects. Hope to see you soon in another daily show - want to see you daily. Will miss you and Sangita pairing and Saruv and ofcourse JLZ...

+ 3
7 years ago Love you Ruslaan! No matter what you choose to do, be it films or TV, your fans will always be there :)

You're super talented and very soon you will get your due! We hope to see you in a TV show very very soon! You made DV so very special for us... we're gonna miss DV and JLZ loads!!

+ 4
7 years ago I hope this clears the air that Ruslaan isnt interested in TV or that he is responsible for JLZ going off air. I wish him luck that he gets good projects like JLZ in the future whether in BW or TV.

+ 2
7 years ago love you so very much Ruslaan. Be it TV or movies; your fans are always there to support you. Best of luck for your future projects. Hope u get success in whatever u do. Loads & Loads of luv; luck & success.

With prayer, persistence, and the help of networking you will see the positive results for a new TV show.

7 years ago you are a good actor Rusi...so dont worry...you will get what you want

Ranubanku 7 years ago JLZ may end on sony tv , but it will remain in our hearts forever