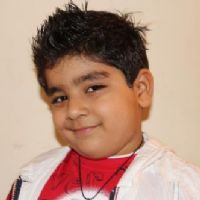 TellyBuzz brings to you the Filmy Friday column which is dedicated to 'Celebs and their craze for movies.' This week we got in touch with popular child artist Sadhil Kapoor who is hosting the show Captain Tiao on Disney Channel.

Let's see what Sadhil has to share regarding his love foe movies...

Yes, I watch lots of films.

How often you go to watch a movie in the theater?

Which is your all-time favorite film?

The last movie which made you cry?

Which movie are you planning to go for?

Darr @ the Mall, papa has told me that he will show me this film in the theater.