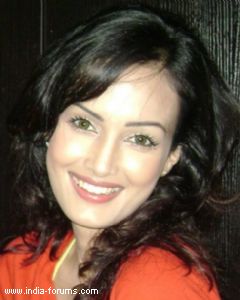 The pretty actress Nisha Rawal was last seen on the small screen in the dance reality show Nach Baliye 5 with hubby Karan Mehra who is well known for the character of Naitik in Yeh Rishta Kya Kehlata Hai on Star Plus.

The romantic Jodi had not left any stone unturned in entertaining the audience with their mesmerizing dance performances in Nach Baliye. Nisha was also seen playing a role in Main Laxmi Tere Aangan Ki on Life OK. The pretty actress has not only entertained the audience with her acting skills on TV but also in films. She was seen with Jimmy Shergill in the film 'Hastey Hastey', and later in the film 'Rafoo Chakkar'.

Nisha who has a huge fan following is not doing TV shows thus making her fans quite unhappy. TellyBuzz got in touch with the actress to know the reason of this and what she is planning next.

Nisha Rawal has not been seen any daily show post Main Laxmi... When asked her about the same, she says, "I like to belong more to the advertisement industry since in the ad world everything happens with a lot of detailing and time is given. There is no pressure of going on air and creating a bank of episodes as compared to daily soaps."

Further she elaborated saying, "I have been a part of daily soaps earlier and have experienced working under a lot of pressure during my short journey with the daily soaps. It's absolutely crazy and that is the main reason I have not completely given myself to television. Monotony kills my spirit and I need to keep reinventing myself."

Well Nisha we wish you all the very best for your future endeavors in whatever you do.

PiyaSarkar09 6 years ago Aww nisha..:-( so we could not see u on daily soaps anyday??

rahuldorsey 6 years ago Tellybuzz had so many people to take interview from but couldn't take why?? Coz those who work daily dont have much time discussing person lives with media

so to fill their weekly quota of articles they may have taught about this bitch because they knew she is jobless n has lot of time at hand esp for media house...

Oyieee forgot PETA has given her a job to save all the rats across world.Even hollywood celebrities like tom cruise are not killing rats and are parcelling to destination Mr & Mrs Rawal:-)

please contact mrs & mr rawal if anyone feels like killing rodents,cockroaches,mosquitoes,stray dogs etc because nisha's job is to save these animals that cause problems in our daily

Both are animal savers but humanity blood suckers.Karan mehra your wife has booked a job once the show ends n that is taking care of all animals coming to your house including from tom cruise home

Chiraiyya... 6 years ago Can someone tell me why Nisha is soo hated? I'm not defending her but I genuinely want to know what she has done?

exclusive
Exclusive Karan Arora recalls his scenes with Erica in Kasautii ...
25 minutes ago