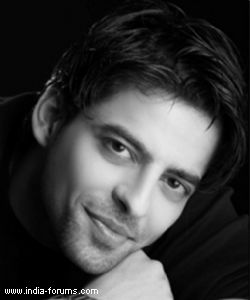 Himmanshoo A malhotra stepped into television industry and grabbed fame through Zee India's Best Cine Stars Ki Khoj. He made in the list of top three finalists of the contest.
Himmanshoo has been associated with various shows in various channels. And now he is back on Zee TV with the new show Bhagonwali - Baante Apni Taqdeer, where he is seen in a brand new avatar called Guddu Shukla.

Tellybuzz had a chat with this actor about his character and his journey from Zee India's Best Cine Stars Ki Khoj.

How did the show happen to you?
I got the show through the normal process of audition which I had given after my show Seven. But before that I had got an offer from Shreya Creations' Jab We Met adaption but the show never happened.

Can you tell us something about the character?
My character name is called Guddu Shukla, who resembles Dabangg's Chulbul Pandey, but not in the complete sense. Guddu Shukla is very attention seeking and is completely youthful and energy. He does small mischief all the time but intends no harm. He is the typical UP based 'chichora' who thinks, even though he couldn't become a doctor or engineer there are other ways to get recognized.

You had to wait for six years after your reality show Zee India's Best Cine Stars Ki Khoj to get this big break, do you think Zee took a long time to recognize your talent?
Not exactly, because it was my decision to stay away from the industry as I had to complete my MBA and my dad was really particular about that. So after the reality show I headed back to Delhi and completed my education. Post my completion I came to Mumbai and started doing shows for Zee Next as they were coming up with youth based shows and the channel was getting ready for its launch. Since I did not have any godfathers in the industry at that time, I didn't know how the industry works. So I did back to back show with Zee Next and went on to do other shows in other channels. Finally I got a chance to work with Zee in Aapki Antara followed by Seven in Sony TV and now back in Zee.

How is it working with a Jay Productions and Samidha Khalid Creative Labs?
Till now the association has been great and Jay is an amazing person to work with and I have a nice chord with him. Since it is a joint venture the relation with Samidha is also great. There is a cordial relation among the crew.

How is it to work with Nivedita Tiwari? It's her first show on TV. So how do you interact with her?
Nivedita is really sweet and I am very fortunate to have a mature co-actor who respects people around her. Since she is new, there is a lot to learn and a long way to go because in this industry there are things that you need to know other than acting. She has to learn her bit in her own way, being in the industry.

How was the journey from Zee Cine Stars to Bhagonwali?
It has been six long years and the journey has been amazing. It was during my MBA vacations when I gave the auditions and did Zee Cine Stars Ki Khoj in 2004. After the show, I headed back to complete my education. In 2006 I underwent training wherein I did my lessons in theater. In 2007, I started giving auditions for shows after which Zee Next shows happened, but the channel got delayed in their launch. Then other shows also happened back to back with the channel because I did not have any idea on how to go about in the industry.  Everything for me was a 'Trial and Error' method where I learnt a lot travelling through the bumpy roads.

Till now you have portrayed characters who know about life and its challenges, but here you are in different avatar, how was it portraying Guddu?
I am really very lucky to get a character like Guddu and I feel glad that the channel and the production team have the faith in me to do this character because when I gave the auditions, I never knew that I could do this role.

Out of the roles you have played, which is similar you in person?
I feel the character Sameer in Aap Ki Antara was more similar to me in a different package. Sameer was very mature, calm and composed but at the same time a fun and jovial person which is like me. Similarly the character Raj in Bindaas Champ also had a little of me in the character, wherein again the packaging was different because Raj was a spoilt brat which I am not in real. I feel that there is a little bit of me in all the characters I played, but all packaged in a different way.

Which was the most challenging role that you did till date?
Actually there are two of my roles I felt really tough portraying. The first being the one I played in Seven, wherein the character name is Haryaksh, and second is the one I now play in Bhagonwali, Guddu.
The character, Haryaksh, is a tough guy from Mumbai who was an Angry young man. But in that particular show I got the time to prepare myself for the character as the script was given to us well in advance and the show was also not aired daily.
Guddu I also challenging because I did not get time to prepare myself for it as the show is a daily soap for which the script is also given daily. The character is the typical Tapori character who speaks UP dialect, which was a challenge for me as I have no hold on the language.

Of all the characters you played, which one did you enjoy the most?
The character Raj in Bindaas Champ is one of the characters that I enjoyed the most playing, because right from my school days till date I have been in the good list of people with no mischief and no pranks. And through this show, I vented out all those activities which I never even tried during my school days.

Do you believe in horoscopes and people bringing good luck?
I believe in numerology and I totally believe in good lucks and I consider my brother Mohit as my good luck charm. This is because everything around me turns out to be perfect whenever he is with me. I got the shows in Zee Next when he was here after his studies. After my shows in Zee Next I was jobless struck by recession and Mohit was in Goa doing Splitzvilla. When Mohit was back after Splitzvilla, I was offered the show that was based on Jab We Met. But then when he went back to US for his studies, the show did not happen. And now Mohit is back after his course and I got Bhagonwali as my big break.

You have been into theatre too, how was the experience when you shifted from theatre to TV?
I have trained myself in theatre but never got a chance to stage myself and now I am really engaged doing shows that I do not get time to get myself into theatre. Doing theatre is a challenge and if I get a chance I would definitely like to try if I could manage it with what I am doing right now. But at the same time in theatre the financial gain is less compared to the one that you receive in television.

There have been a lot of shows that have already marked their place in Zee TV with their primetime slots; do you think that being in an early slot like 6 pm can affect the viewership?
We all were really disappointed when we got the slot of 6 but at the same time the channel and the production team have done a great promotion work for the show. And today we see that certain shows even after being in the primetime slot fail to bag TRPs.

There is also another show that is launched along with you; do you take that as a challenge?
When I came to know that there is another show that is being launched with us, I was really happy because their slot is next to ours and the promotions were done together in the channel. And since the show is on the same channel which is like a family I do not consider the show as a competition.

Your brother Mohit has also got into acting, do you chat about your work?
Yes of course and since I am the eldest one and have a prior experience I could always tell what is right and wrong and what can be the best for him and what is not. But Spiltvilla was his sole decision (laughs).  Since I did not have any godfather in the industry when I came every work of mine was an experiment for me. When I was offered Bidaai I decided to do Zee Next shows. Everything was trial and error and I had learnt a lot from it because of which I can really help out my brother today. Because we now belong to the same industry we do sit and discuss our work and exchage feedback.

What are your expectations from the show?
I just expect good TRPs and GRPs so that I get calls for reality shows too because I love to a part of dance reality shows like Jhalak Dikhla Jaa.

rani2007 9 years ago Please do another interview with Himmanshoo!

Aginaya69 9 years ago just like to comment here. from the time this interview was published, bhagonwali moved timeslots (from 6 to 6:30), and at the moment, you have a 1.19 TRP.

bhavni88 9 years ago all the best for your new show..love your character..

Davi 9 years ago Hes a gr8 actor. Loved him in seven and aap ki antara.

rittu_deep 9 years ago All the best to you for ur new show Bhaagonwaali...You are a nice actor...

pippa 9 years ago Nice looking guy. I remember him in Aap ki Antara.

But why can't he remember the name of his show? It's NOT Geeta!

shivani003 9 years ago Have loved you from ur Seven days. Ur a brilliant actor! :D