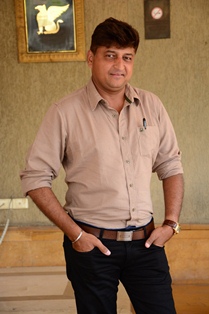 Known for his admirable writing in his shows like Khichdi, Sarabhai Vs Sarabhai etc. Aatish Kapadia is all set to showcase his exemplary writing skills in SAB TV's latest offering Badi Door Se Aaye Hain which projects a totally new concept for the audience.

This is a complete new concept, so how did you come up with such an innovative idea?

It was Devika's idea of making a serial on aliens. Later Anuj Kapoor business head from SAB TV called me and Devika and things got materialized so we planned to come up with a comedy serial based on aliens. The first thing which strikes our mind when we talk about alien is a distinct personality, someone to whom we don't relate ourselves, it may be a Chinese, African, Afghani or some other community. We become judgmental when we come across some distinct personality because somewhere we don't feel comfortable with the idea of them being around us. So by extending on this topic I thought why we don't do something, in which aliens are shown on a brighter side, you must have seen in movies that aliens are always shown in a darker side but we thought of portraying the other side. We also want to give this message to audience that if something or someone is different then that doesn't mean that they are bad, don't judge them and try to accept those distinct personalities.

How will the story proceed in the coming episodes?

The aliens will arrive on earth, they come with a mission which is a suspense which will  be revealed in the coming episodes. They come and stay with a family without revealing their identity, they try to learn human beings nature and their way of living. In this process they learn many things and help human beings with their powers. The story is a symbiosis between two families which stays together, understands each others way of living without knowing that one family belongs to an alien race. In between at one point we will bring a threat in the story where the alien's family's identity will be revealed and what will they do if they get trapped.? There is one love story which will make the whole plot thicker, it is an inter race love story between alien and human beings.

Do you think this show will have the capability to beat your other comedy shows like Srabhai vs Sarabhai or Khichdi?

We have no intention to beat any show because I don't make shows to beat anybody. I make shows in absolute. I don't believe in comparing and I am not a comparative person. When I made Sarabhai people thought wow they are so sophisticated and classy. When I made Khichdi people thought look how stupid they are? So every show has it's own specialty which is distinct. I don't believe in  any race. I am in race with myself as I want to see how better I can do with my show.

Do you think this show will attract the audiences interest?

Let the audience decide that. We have done our job of making this show interesting and I hope people enjoy this show. We will try keeping our audiences hooked to the show. How far this show works that depends on the audience.

Share with us the hardship you have being throughout in writing this show?

Writing for any show requires lot of hardship but you know that output you get from that hardship and struggle is always good. I treat my story as my child, so I nourish it in that way.

How is the tuning with your stars?

It is fantastic they all follow me religiously. They follow my instruction carefully and apply that in their work.

6 years ago Aatish sir's work has always touched our hearts.. I am sure we are gonna go on a laughter ride.. Cant wait for Badi Dooor Se aaya hai to start.. The team is super, and most important part, its the SVS team which rocks and sumeet sir rockkk!! :) :)