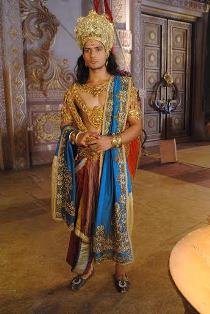 The talented actor Vin Raina who is seen playing the role of Nakul in Siddharth Kumar Tewary's popular mythological show Mahabharat talks about what made him take up the show, why he was offered the role of Nakul when he went to audition for the role of Arjun, his feelings now on being a part of the show and much more in conversation with TellyBuzz.

Further we asked Vin on how does he feel now to be a part of the show and he says, "I have started liking my character now. It is a great experience to be a part of this show as it is my first show and I am getting to learn a lot and explore my acting skills."

Vin says that it was a very nice feeling watching himself on television screen portraying the role of Nakul, "I really can't express my feelings in words on how I felt when I saw myself being a part of the show during the telecast. It was absolutely a great feeling."

Furthermore he elaborated saying, "Initially I was much scared and nervous about the reaction of audience towards my character also as it is a mythological show, the Hindi language and the diction matters a lot. I had taken many workshops for the same even though my Hindi was pretty good, I wanted to do justice to my character. But the best part is that I am also getting a good response from everyone on my character and for my acting skills. People have started liking my character and I am getting good compliments for the same."

Lastly we also quizzed him over a question asking what are the three main reasons that people should watch Mahabharat and he says, "The very first reason of why should people watch Mahabharat is that it is differently and beautifully made. Secondly each and every character in the show is portrayed in an important way and thirdly the characters are new and fresh."

"According to me there is 99% hard work that a person does and just 1% luck that matters. But eventually you need both to become successful in life" he concluded.

We wish Vin Raina all the very best for his future endeavors.

KiranSonu1 6 years ago Vin Raina Love u . u r so cute
Love ur performance & All d best & Good Luck
Thanx for dis intw...

Sea-Hawk 6 years ago Aham Sharma's interview please .. waiting for it for long

CHAVI5050 6 years ago Mahabharat rocks super show.. all the best all Artist.

Krilovad 6 years ago Vin rana all the best as Nakul Love Mahabharat...

-_Aakanksha_- 6 years ago All the best Vin Rana for nakul..Love to see all pandavs bondinggg

neetu_anya 6 years ago Arjun and Krishna are the heart nd soul of Mahabharat..just wait nd watch y this much importance is given to Arjun's role !!!!

mythili2 6 years ago All the best vin rana.. you doing great as nakul.. :)