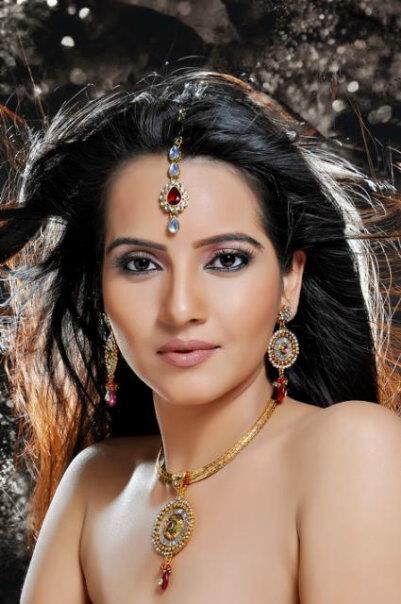 No one would believe that this good looking Mumbai girl got into acting by fluke. We are talking about Geetanjali Mishra who plays Maithili in Colors popular show Rangrasiya who comes across as a natural talent. However the story behind her entry into acting is quite interesting and she shares it with us, "I never dream't of being an actor. One day almost eight years back my neighbor, the noted director on Indian Television Seema Sharma called me home saying she needed my help. She told me that one of her actors had ditched her at the last minute and the next thing I know was that I was loaded with makeup, clothes and accessories and acting in a serial! It was a shock to me too since till then I had never ever seen shooting in real life and was far away from the glamor world!"

Geetanjali's first show was Zee TV's Piya ka Ghar, after which she never looked back. One show lead to another and they almost fell in her lap without any hard work says Geetanjali, "I entered the Piya ka Ghar when it was about to end so mine was a small character which lasted only for a month or so. When this show got over I got Ek Ladki Anjaani si where my character lasted for 8-9 months after which I got a show Jaane Kahan on DD and then one thing just lead to another. Life was easy for me and I didn't have to struggle or give auditions at all since I always got a new show when my on-air show ended."

It took some time for her to get used to being an actress and she groomed herself as she continued working, "I consider my show Sangam on Star Plus to be the first daily soap which I enjoyed acting in. Till then I had learned a lot about acting but with Sangam I could relate with what I was doing."

However, Geetanjali was noticed and is remembered for performing quite a few bold roles in various stories of Crime Patrol: Dastak on Sony TV and Savdhaan India @ 11 on Life OK. She seems to get into the skin of the character and is a natural in these roles which have got her lots of popularity. "Crime Patrol Dastak and Savdhaan India are shows which are very realistic since they are based on true stories. I have to be in minimal make up, natural dressing and they are shot at real locations so the entire experience is real and I enjoy doing them. It helps that they are episodics so even now if I am offered a role I can easily shoot for them."

Totally opposite to these roles is her current character of Maithili in Rangrasiya. She is shown to be a strong support to Paro (Sanaya Irani) and Rudra (Ashish Sharma) but is quite submissive 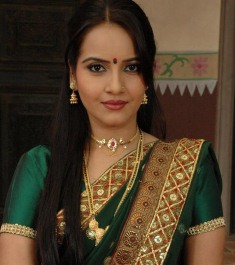 when it comes to her relation with her saas (Ananya Khare). With her background of playing strong characters how does she feel playing a character like Maithili? "As Maithili in Rangrasiya I feel restricted but then actor wahi hota hai joh har character mein dhal jaaye and I am doing my best. As an actor I have to understand the viewers thought process, and then think about how I am going to portray the character in a way that will be liked by all.

At present Maithili is entirely positive busy playing a typical Rajasthani good bahu who takes care of her family. I don't know as of now but I think there will definitely be a change over after some time because how long will someone suffer in silence. She will reciprocate and not take things lying down. Also I have a bold image otherwise so it will be easy for me to change."

Geetanjali who now understands the nuances of acting further adds, "I definitely enjoy portraying more of bold or negative roles. There is so much more an actor can do in such roles. While playing Maithili I feel very limited as an actor since I have to restrict my movements, my voice and expressions too. I have to always tone down my acting skills whereas in a bold or negative role you can express more and thus I enjoy doing it. Even my fans remember me in my bold shows despite the fact that I have done so many daily soaps which are aired on prime time from Monday to Friday as compared to the 20-25 stories on shows like Crime Patrol and Savdhaan India. They ask me about those bold roles and want to see me in similar characters."

For someone who got into acting by chance Geetanjali sure has come a long way!

6 years ago good luck Geetanjali, i'm liking Mythili's characterisation but yeah, i hope she gets to give it back to her crazy, murderous saas at some point too! Sanaya Irani, love u hamesha, u r wonderful as always and waiting to see what happens to Paro next :)))

6 years ago Geetanjali, Ananya, Sanaya and Ashish I love watching you all in Rangrasiya!