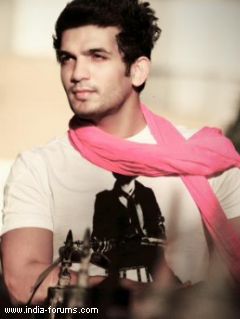 Heartthrob Arjun Bijlani, who was recently seen as Aditya in SAB TV's cookery show Jo Biwi Se Kare Pyaar, is quite happy and keeping himself busy taking care of a new member in his family. Wonder who the new member is? Well, its his pet dog Boozy's puppy.

TellyBuzz spoke to Arjun to know more about the new member in his family, his new projects and much more.

Talking about the new member in his family who is keeping him busy these days, Arjun says, "These days, I am busy taking care of my pet dog Boozy's puppy. There were 10 pups out of which I have got one and the rest are with the owner of the female one. It's like a baby in my house now and I have named him Whisky as his father's name is Boozy (laughs). I am spending my day taking care of him. We have to wake up 4-5 times in the night also whenever he cries. He wants to sleep on the bed and if we let him sleep down, he wakes up in a minute and wants to come on the bed."

It seems that Arjun who is happily taking care of his new pet at home is looking out for new projects too. The actor is planning for a comeback after his much needed leisure break as he says, "I am meeting people for new projects. I had just come across a film narration and I am thinking over it. I have returned from a long holiday so just resting and relaxing for now and I am looking at many things together. I have given a couple of look tests for different production houses. The house is on fire because of this new puppy (chuckles)."

Well, we have recently seen Arjun cooking mouth watering dishes on-screen but has he tried cooking something in real getting inspired from the show? Arjun says, "I haven't tried cooking something new but I have made few dishes which I had made on the show. I tried making Gobhi Dalcha and Paneer. Nobody from my family said that it's good; they said, 'Not bad' (laughs). Firstly, my wife Neha said - 'No comments' but after tasting the dish, she said that it's really nice."

When asked Arjun about the comeback in the new season of Jo Biwi Se Kare Pyaar, he tells us, "I have no idea about it right now. I have heard that it's coming back in March but I have no clue from the production house yet about its comeback so I can't comment anything on it right now."

"I would like to wish all my fans a very happy new year and I want to give them lots of love that they have given me. I wish the year 2014 to be a good year and I will get to do good work so that they will also feel happy for me. I wish to get good work this year so that they can shower all their love and blessings for me," concludes Arjun giving this message to his fans.

We hope to see you back on-screen soon Arjun, wish you all the best!

aastha.aastha 7 years ago Missing you Arjun
Come back soon please

urdbest 7 years ago Arjun is a superb actor...waiting for his comeback

kitkit 7 years ago Arjun is spending time with his pet's puppy :)

nikitani 7 years ago Keep smiling AB
Waiting for your comeback

+ 2
7 years ago We really wish to see u back on screen...wishing u all the best Arjun