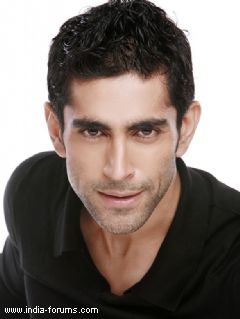 The good looking and talented actor Tarun Khanna, who was recently seen playing Raavan in Life Ok's popular mytho series Devon Ke Dev. Mahadev, is all set to be seen in Nautanki Films' much awaited show Rangrasiya on Colors. Tarun will be seen playing the main negative lead in the show. TellyBuzz spoke to Tarun to know more about his character and his experience shooting for the show.

Talking about his character, Tarun told TellyBuzz, "I am playing the character of Thakur Tejawat Singh in the show who is of royal blood. He belongs to the family of kings. He is a good guy and he loves his family members as well the people of his city but some unresolved issues with the government has made him turn negative. He is the main catalyst of the story who will take the story forward."

We asked Tarun as how has been your experience playing this character so far and he told us, "It's very challenging. I am speaking a mix of Hindi and Rajasthani languages. Speaking a mixed language becomes more difficult for one to speak. I have to take care of the fact that the regional flavor should remain in my language. Shooting with a moustache has now become like a regular thing for me. Just because my wife doesn't like me having a moustache, I don't keep one but otherwise I would have kept one."

He further added, "I would love to play main lead characters but they are not coming my way. I was offered a big role in a big show recently for which I told them to wait for a period of 6-8 months but after someday I was told that the channel finds me too negative to play that character. Initially, I was rejected to play the character of Raavan too but later they found me suitable for it. After playing Raavan, I have got much appreciation. So, it's better to leave yourself in the hands of destiny. I really enjoyed playing Raavan and let's see how Rangrasiya will go on now. I am quite positive about my character in the show and feel that people will like it."

We wish Tarun all the best for his new show!

7 years ago Tarun, Best wishes for you and Rangrasiya team.

7 years ago Hello Tarun, Nice to get some background about the character. All the best. :)

+ 3
7 years ago Rang Rasiya sounds like a mixture of Tina's ff Desert Heat and Ram-Leela to me .

+ 3
7 years ago I can't express my happiness! So he'll be playing that complex character of Iago!! Must say he fits the bill perfectly! He'll rock as Iago! Can't wait for Rangrasiya now!!

7 years ago Hello Tarun,
All the best with Rangrasiya. :)

+ 3
7 years ago May Rang Rasiya rock the trps charts and be on top from 1st week with Sanaya Irani, Ashish Sharma and baddie Tarun Khanna:)

7 years ago Tarun,
See you next week.
All the best for Team Rangrasiya. :)

7 years ago Tarun, Best wishes for you and team Rangrasiya. :)