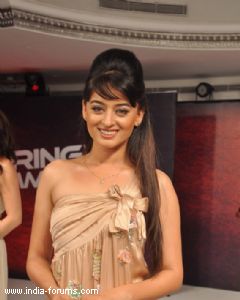 Small-screen actress Mahhi Vij will not participate in the fifth season of action-adventure show Khatron Ke Khiladi Darr ka Blockbuster because of an injury.

"I am not part of Khatron Ke Khiladi Darr ka Blockbuster due to fracture. I have broken my toe finger in three pieces. Thank you all for the love and support," Mahhi posted on Tuesday.

A source close to the show also confirmed the news.

"Mahhi had hurt herself last week and was still contemplating on joining the show. However, she will not be a part of the show now," the source said.

They have left for South Africa, where the show will be shot, on Tuesday night.

Khatron Ke Khiladi Darr ka Blockbuster will be hosted by director Rohit Shetty and will air on Colors.

gurlover89 6 years ago u r totally an awesome actor GURMEET CHOUDHARY... m in love with u every day.


Loving all the pics of KKK
You...

shinyyashu1 6 years ago miss watching u daily... hope those days comes back soon n i get 2 c my charming GURMEET CHOUDHARY...

..Balvir.. 6 years ago Looking forward to c u in KKK. All the best Gurmeet.

faria86 6 years ago Gurmeet you are wonderful actor ,dancer & a nice person too
keep up the best work gud luck 4 KKK

Ubiquitos 6 years ago All the best to Gurmeet Choudhary...
Excited...

Naterguru 6 years ago xited 2 watch u in kkk gurmeet choudhary... hope u impress rohit shetty this tym.. all d best.