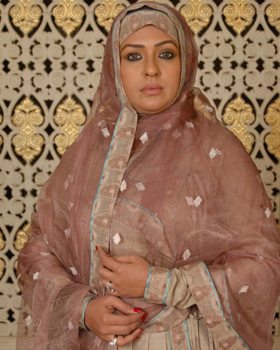 Zee TV's historical show Jodha Akbar is winning the hearts of the audiences through the performance of its actors and its always pleasing to watch beautiful scenes of Jodha (Paridhi Sharma) and Akbar (Rajat Tokas) in the show. While many actors have been praised for their acting skills, once such actress who has won an award for her exceptional negative stint is Ashwini Kalsekar. She has efficiently portrayed the character of Maham Anga.

With the recent tack of Maham Anga's death, we ask Ashwini her journey in the show, experience with the team, about problems she faced while shooting and much more in conversation with us...

I am inspired by this lady Mahamanga - The character of Maham Anga has really touched my heart, I think I will take time to get over this lady. After essaying her character I have developed a curiosity to read about her. She was a very intelligent and strong lady, she always took firm decisions.

My daily routine was to travel for five hours - Yeah actors face problems when they do a historical show. I learned Urdu for this show because if you don't deliver dialogues properly it will go wrong also the costumes which we wear in the show are not so easy to carry during shooting. I used to travel from Malad to Karjat daily which took me hours to reach on the sets. I had to wake up early in the morning by 5 AM for the shoot initially as it was difficult to travel but later I got used to traveling. I think all this hard work was worth for this show because I would not have experienced things like this in any other show.

Glad to receive appreciation for my work from Bollywood people - I was glad to receive an appreciation from my friends for my performance in the show and so I was always conscious about my scenes. I always tried to give my best because I knew that people out there are watching me. I have enjoyed a lot while essaying this character.

Some moments to be missed: I cannot tell you now about the moments  which I will miss but I will obviously remember some moments after some time when I will watch my scenes again.

6 years ago You will be very much missed Ashwini Kalsekar...You were awesome as Maham Anga... Best of luck for your future...Paridhi Sharma and Rajat Tokas rock!!!!

6 years ago Ashwini madam - You were awesome as Maham Anga. Your departure from the serial will be sorely missed. Best of luck for your future ventures. Paridhi Sharma and Rajat Tokas rock and roll in Jodha Akbar.

+ 4
6 years ago rajat tokas ur awsum. we will miss u ashwini.

+ 2
6 years ago Rajat tokas and paridhi sharma as Akdha rocks, love u guys! Ashwini did a superb job as maham anga although could not stand her character

6 years ago hats off to the brilliant prformances!!