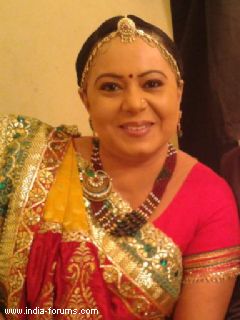 Talented actress Neelu Vaghela who plays Bhabo in Shashi Sumeet Mittal's popular show Diya Aur Baati Hum, is quite happy by playing the character of Bhabo and the love she gets from the viewers across all over. She has gained immense popularity by portraying strict Bhabo on-screen.

TellyBuzz spoke to Neelu to know more about her character, her feelings of playing this character and much more in this conversation with TellyBuzz...

The character of Bhabo has given you immense popularity. How do you feel about it?

It feels very good and what else an artist could ask for more when he or she is praised and gets so much of popularity in the first serial itself and that too when people know the artist by his/her character name. I feel very happy about it. I am thankful to Star Plus and Shashi Sumeet Productions to give me this opportunity which was just a bang on.

It happens that when an actor plays a negative character, then he/she gets hate messages from fans. What kind of feedback you have got so far?

Earlier my character was very strong, negative and loud. Initially, when I was narrated the script about this character, I was told that it would be a negative one, then I thought for a while that it's going to be negative but then I went ahead with it with a thought of doing justice with this character. People should get angry on me as I am playing a negative character or if I am emotional then people should get tears in their eyes then only my character would be a praised and my hard work will be paid. The case was different with Bhabo as the audience didn't get to understand whether Bhabo's character is negative or a positive one (Laughs). People used to think that even if she is scolding which used to come out in a negative way but the fact was Bhabo used to scold for right things. Earlier I was little scared with a thought that people will say bad things or they won't like to see my face but here it's just the opposite. People love Bhabo's character very much. Recently, when I was shooting in Karnal some ladies came to meet me with their kids and used to ask me to bless their kids so that they can become like responsible and matured like Suraj (Anas Rashid). So, it's now every mother's thought that even her son should be like Suraj and how she has bonds well with her family.

Generally this kind of feeling doesn't come in the minds of the audience for a negative character. Even young girls and school going kids call me Bhabo whenever they see me. I have never seen this kind of love by the audience for a character of a mother. Audience generally love the hero heroine of the show but the character of a mother who is little strict is gaining so much love from the viewers. The people can take this character as negative only with the fact that she belongs to a village and she wants to live within certain boundaries and she never wants to go beyond that.

It happened recently when an old lady aging 80 yrs. came to me and she touched my feet. This is the respect which Bhabo has earned so far and it is very pleasing to see that people want to get blessings from you. I felt that what else God can give as a blessing to an artist in this form? I really want to thank Bhabo for this.

How has the character of Bhabo evolved so far?

The character is going very well. Seema Mantri ji, Shashi Mittal ji, Raghuvir Shekhawat ji, the direction team and everybody associated with the show are really working hard to shape the character well. They have to think a lot before taking Bhabo's character from one scene to the other. If she is angry on something then they have to create logic for that. It's not easy to work upon her character. They all including me think a lot for this character so that people don't take anything differently. We ensure that the flow of Bhabo's character should go properly.

Initially she used to not gel well with Sandhya (Deepika Singh) but now everything seems to be perfectly well as Bhabo is seen loving and supporting her...

She has always loved Sandhya but if a lady who is not well educated and hails from a village, has to face such kind of a lie that her daughter-in-law is not well educated but later comes to know that she is well educated, doesn't know about any household activities at all and not even loves her son, then anybody would react like Bhabo did. Later when Bhabo comes to know that even Sandhya is trying to learn the household work, trying to bond well with her family and her son loves her a lot then she became happy.

How has been your experience of shooting in Karnal?

We were shooting at the Naval Commando of Karnal and the VIPs of that academy are very crazy about our show and all the characters. They used to bring home made food for us and they also used to have fun with us saying that we will teach Sandhya to make Bajre Ki Roti (laughs). They all were in the awe of Bhabo's character so much so that they only had one thing in mind that Bhabo has come to us and we should take her blessings and bring food to feed her. They had forgotten their family members that time (laughs). They all used to follow our show and tell us about the episode.

Any fond memories of those days...

The academy police officers used to come to me and ask me to just say a hello to their wife or girlfriend on the phone. They used to just ask me to say them hello and hey maara ram ji so that they get assured that they are talking to Bhabo only (laughs). 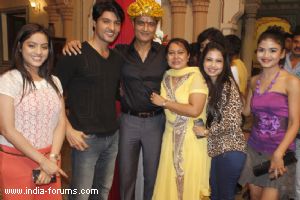 How is your off-screen life on the sets?

I feel joyful off-screen because we all bond well like a family. We share our lunch together and do lots of masti even during enacting emotional scenes. We ensure that we don't spoil something related to our character. Our level of interest is the same like our initial days and this is the plus point of our show that all the characters of Diya Baati do their work honestly and try to deliver their best.

In future, would you support your daughter-in-law if she wants to pursue her career like Sandhya?

100% I will support her. I have started implementing so many traits of Bhabo in my house too. I look after the discipline of my family by being strict like Bhabo. Initially, I wasn't like that. I believe in supporting and I would support my daughter-in- law with her career but at the same time, I would also suggest her to get involved in the household work and family related things as well because that's your duty. You have to manage your career as well as take care of your family too and try to be the happiest woman of the world because even your family would expect you to spend some time with them. It's very necessary if one wants to have a strong family.

We completely agree with you Bhabo(Neelu Vaghela) and we wish you to keep doing the good work!

7 years ago Neelu Ji, your role as Bhabo is nice, like your bonding with Anas Rashid and Deepika, Diya Aur Baati Hum rocks :)