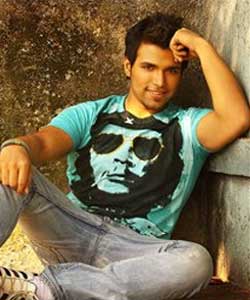 Who are you most grateful to: My dad, because he trusted me in spite of being from an orthodox Sindhi family. He never expected me to do anything apart from business.

At what time in your recent past have you felt most passionate and alive? I recently got nominated for the ITA Awards for the Best Supporting Actor and also for the best actor in Negative role in Bandini. I called up my parents and friends who are there in Dubai to inform this and looking at them and their reactions made me feel really passionate and alive.

If you just win a million dollars, would you quit your job? Never, because I was born to act.

If you had a chance to go back for 24 hours to your past, where would you go and why? I would go back to my school days of 11th or 12th because those were the days I realized how important it is to be in school and in the circle of friends.

Favourite cartoon of all time: Tom and Jerry always.

When was the last time you lied to the media? And what was it? I never lied to media till date.

What was the most romantic thing that a person has done for you? There were so many things actually. There was something special that my ex-girlfriend did. She had treated me on cruise where the whole upper deck was booked for just both of us. One of my other girl friends had gifted me a guitar because I play it and she has also cooked for me.

An embarrassing moment: That was when I was giving the auditions for Dance India Dance 2. I was giving my performance in front of the judges and the producers and unfortunately I was wearing a tight jean. I was supposed to dance for two and a half minutes but my jean tore in the first minute itself. I performed my piece and immediately after that all I had to do was to cover up myself.

What is your daily diet? There is no special diet regime that I follow. I have four meals a day where I make it a point to have heavy breakfast. I would always have channa with me so that I could have it during regular intervals.

The phone that you use? Blackberry

Your current obsession? I am always obsessed with my work

If given a choice which language would you like to learn? Spanish and French

Who was the first girl who came to you and said I love you? My younger sister actually. She came to me and said she loves me on my birthday.

LaalGulab 7 years ago Rithvik Dhanjani - u r awesome..
Love u..

soundsofcedar 8 years ago "My younger sister actually. She came to me and said she loves me on my birthday." Aw he is so adorable

shivani003 9 years ago I love him as Jeh! He's awesome

lilly_star 9 years ago Ritvik looks like Rithik Roshan a bit.

JustNihaaa 9 years ago awww he is sooo cute and adorable

harikajaanu 9 years ago luv u RD watching PKYEK just 4 u bt ur are very less seen in the show and its very bad i hope ur role turns complete positive keeping mah fingers cross u are looking awesome in the idea 3G ad luv u jay:D

-DoAsInfinity- 9 years ago finally a TB interview of rithvik

love him so much!!!he's d best

Thaathi 9 years ago AWWWN ! Rithvik You rock ! You are smoking hot !