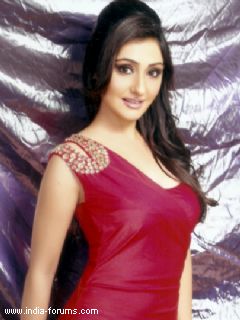 Beautiful and talented actress Namrata Thapa, who was last seen in Ravi Ojha's Badalte Rishton ki Daastan on Zee TV, is all set to be seen playing a cameo in Life OK's Gustakh Dil. The actress is quite happy working again with the same production house and enjoying shooting for the show. The actress will be seen in a different look in the show which will be interesting to watch out for the viewers.

TellyBuzz spoke to Namrata to know more about her character, her experience of shooting for the show and much more.

Talking about her character and experience shooting for the show, she told us, "Chaitanya Chowdhury and I are good friends of Lajjo (Sana Amin Sheikh) and Nikhil (Vibhav Roy) who have come all the way from US with a motive to bring both of them closer. While Lajjo and Nikhil are quiet and simple in nature, we are mastikhors and very talkative. We all are enjoying a lot while shooting as if we are on a picnic."

She further added, "Ravi Ojha's Production house is a very good production house and I always wanted to work with them again as they are really nice people to work with. I am enjoying a lot working with them again as well as on my new look too which is a western one. All this while I have played roles wearing traditional outfits only so this time I am wearing a western outfit in the show which is new and interesting. My look is totally changed in this show. It's feeling like as if we are on a picnic on the sets."

So, what has kept Namrata busy post Dastaan? She said, "I have done two movies recently, one is Bengali and one is Bhojpuri and I took a lot of rest after Dastaan went off-air. I always wanted to do a role in western look and I am happy that I have got an opportunity to play this one. In future, I would love to play a character with grey shades."

"Currently I am in talks for 2-3 projects right now but nothing has been finalized yet," concludes Namrata talking about her future plans.

Way to go Namrata, keep up the good work!!

7 years ago waiting for the pair sameer-Namrata on screen ,

II.Twitter.II 7 years ago u so cute as trisha..
keep rocking ...

7 years ago she such gorgeous actress
love her very much

Zeeth 7 years ago she is very gorgeous in today episode...

7 years ago namratha such a gifted actress ,perfect girl for sameer

7 years ago lovely jodi of all time .. who?
that is our Sameer& Namrata aka raj-lata

7 years ago Namrata love u lot
very best pair for sameer.u so cute

7 years ago You are so beautiful namarta. I really like you in YMGGK as Raj's wife
coz Samrata amazing jodi

7 years ago all the best Namrata
you and Mr,Dharmadhikari have marvelous chemistry