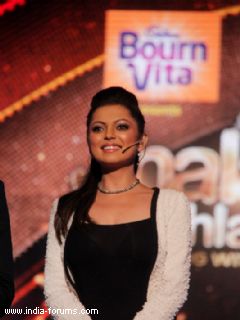 Colors is yet again back with its most acclaimed and entertaining show Jhalak Dikhlaa Jaa season 7 by BBC Productions. Not many days are left for Jhalak to commence, we spoke to Drashti Dhami to know her experience as she will be hosting the season for the very first time.

Television's gorgeous actress Drashti  Dhami, seen as Madhu in Madhubala - Ek Ishq Ek Junoon on Colors is all set to present herself in the form of a host. Though its very different from acting, Drashti is pulling her socks up to show her hosting skills.

Let's see what Drashti has shared with us

As Drasti was the winner of Jhalak Dikhhlaa Jaa Season 6, and now in this season she will be seen as a host. So we asked her about her experience from being a contestant to a host she said, "It is different, the feel is different. I am not rehearsing everyday but I have to maintain the sense of timing, spontaneity, sense of humor and wittiness so I'm trying to get it right. It's much better this time as I won't be going for rehearsals every day, I will be just doing it for the day. I guess and I hope that it will be more peaceful this time. There is lots of technicality involved in it about which I was not aware of so we did a run through and I think I will get around with it in a bit. My co-host Ranvir Shorey is really damn good he is lot of fun to be around, so I think we are going to do a good job. There will be lot of funny lines, punch lines, lot of sarcasm, fun things."

We further asked her about her journey in Jhalak Dikhlaa Jaa as a contestant and what comes in her mind when anyone talk about the show? According to her what is more difficult hosting or performing for which she replied, "One thing that reminds me is the first 30 marks, the second thing that reminds me is the award and the third thing that reminds me is the cheque which I have received. As I have experienced being a contestant, now it is easy for me to perform but hosting is something new for me so yes hosting is more difficult than being a contestant. When I hosted Golden Patel awards, it was little immature for me because I really didn't know a lot but Manish Paul helped me a lot. I will be honest for the first time, we had a podium where we stand, many a times when I go wrong or I know I would fumble then I used to press his hand and his palm and used to be like take it over from here. He used to take it over from there so he helped me in lot of way, it was a nice experience. Before that show Karan Tacker was nervous and he called me and asked me that kaisa karunga mai karnai payunga so I told him just karle and you will remember it for rest of your life."

Lastly we quizzed Drashti about her plans to work in Bollywood she averred, "I have not yet got any offers for films to be honest but let's see what happens in near future because nobody knows what future hold for you or me but yes if something nice then why not."

Conveying her message to her fans she concludes saying, "I would like to say to my fans that thanks for all your love and support. I will try my best to keep up to whatever you have expected from me and love you all."

guru.jaan 6 years ago Drashti dhami you are so gorgeous..
Love you dear faria86 6 years ago Drashti Dhami
Wishing you a day filled with lots of love, luck ,happiness and blessings ! Good luck for shoots

Mahi78 6 years ago Love you Drasthi, I'm sure you will rock the show as an host, I'm watching JDJ this season just for you.

Maankhurana786 6 years ago GEET DRASHTI DHAMI you are the BEST...
Waiting for tomorrow JDJ only for you...
Love you angel Drashti Dhami...
God bless you..

junoonMaanGeet 6 years ago GEET DRASHTI DHAMI all the best...
Waiting for tomorrow JDJ only only for you... Love you my MISHTI DRASHTI...

Amoureux 6 years ago I'm sure Drashti your gonna be amazing as a host. All the best. Love you