View Profile
Esha Deol, the daughter of the very popular actor-duo of yester-years, Hema Malini and Dhamendra has managed to just stick on in the industry in the past six years, with a big hit still awaiting the actress!! The actress who made her debut with 'Koi Mere Dil Se Poochhe' in 2002 has no doubt given some decent performances in her recent films, 'Darling', 'Just Married' and 'Ankahee', but her future in Bollywood still seems to be a big question mark!!

The actress who is busy these days portraying the character of an air hostess in Kunal Shivdasani directed film, 'Hijack' has high hopes on this film, and why not, if reports are to be believed, it is heard that Esha has simply excelled in this film!! 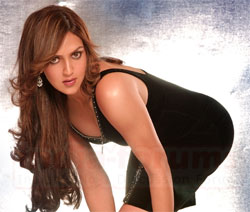 Accepting this fact whole-heartedly is the director of 'Hijack', Kunal who says, "She has given an outstanding performance and I believe that this is surely an award winning performance too". Talking more on the concept of the film, which is based on the hijack of a plane, and the chances of Esha bagging an award, the director says, "Don't be fooled by the belief that only out and out emotional or dramatic movies can fetch an award for an actor. If a role has a great potential, is written well and performed convincingly, an actor can get an award even in a film belonging to action genre".

When asked to talk on Esha's role in 'Hijack', Kunal says, "The maximum that I can reveal about her role is that she plays an airhostess in the ill fated airplane. While Shiney Ahuja's character aims at foiling the attempt, a strong undercurrent of emotion also flows underneath. To develop this further, Esha's character is a must requirement in the narrative. You would realize it on watching the film".

Talking about Esha's selection for the role, Kunal reveals, "I wanted someone who could look convincing as an air-hostess. The moment I met her, I knew she was the right face and body for the role. And to think of it, she is covered from top to bottom throughout the film. It needs some conviction from an actor coming from hardcore commercial background to be willing to be seen in only one costume throughout the film's length."

So does it mean that the viewers will not be entertained to Esha's regular song and dance stuff? "This is why the three songs which are there in the film are also mainly situational. While there is one melodious romantic number between Shiney and newcomer Kaveri (who plays his wife), there is a racy club track and an emotional montage number picturised on the passengers who are stuck in the plane. 'Hijack' is mainly a film which is a high energy action entertainer with a huge mystery element to it. We couldn't have added any unwanted numbers just for enhancing the commercial value of the film", ends Kunal.

Looks as though Esha Deol, the real star has finally arrived with this film!!-(SAMPURN)