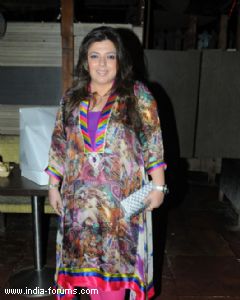 The talented actress Delnaaz Irani has done many shows on television and is recently seen in the television show Kehta Hai Dil... Jee Le Zara. The actress was also an ex contestant of previous season of Bigg Boss Season 6 and had been for good 93 days in the Bigg Boss house as the 6th finalist of the show.

When asked Delnaaz about the one thing she learned in being a part of a reality show like Bigg Boss she says, "I have learned the most in terms of cooking when I was in the Bigg Boss house. I learned to make different types of dishes from all the contestants and also a variety of Dals from everyone."

Delnaaz is happy that Bigg Boss has helped her to enhance her cooking skills and it was a nice experience for her to cook variety of dishes, "I learned a lot of Gujarati dishes especially from Aashka Goradia as she used to teach me and help me a lot with cooking. Bigg Boss helped me in increasing my cooking skills and the time I have spent in the Bigg Boss kitchen is one memorable experience of my life. And because of it now I can make a variety of food." (Laughs)

We wish Delnaaz all the very best for future endeavors.

purvi_tvstarlet 6 years ago Delnaaz all the very best for future endeavors.

joohi5ifyy 6 years ago Didn't like you at all.You were so fake on BB.