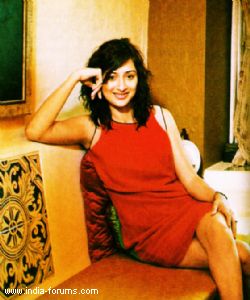 As the news of Gauri Pradhan returning to TV was doing the rounds for quite sometime now it seems the news is true. It was reported that gorgeous actress Gauri Pradhan Tejwani is returning to TV with Ekta Kapoor's new venture which will be aired on Colors. The pretty actress rose to fame with Kutumb and was seen in the popular show Kyunki Saas Bhi Kabhi Bahu Thi.

Gauri who is returning back to TV after a sabbatical says that nothing is confirmed as yet, "I'm in talk with the production house for their new show on Colors but things are yet to get finalized so I really can't comment on that. But Balaji is definitely first choice as it's like my second home and I'm very comfortable with them."

When asked Gauri about any specific reason to play a mother on screen she says, "These days there are new and young faces at the age of 15 or 16 coming on TV. So when you are double the age, of course there is nothing wrong to play roles like mother."

Gauri who is excited to comeback on TV says that she was waiting for a good opportunity to come her way, "I had my personal commitments and also was waiting for something good to come my way. Today the scenario on television has changed a lot and there are lot more things to do. That's the reason of why I'm so excited to return back," she explains.

As the actress is all set to return to dailies, when asked whether has she discussed about the same with husband Hiten Tejwani or not, she avers, "He was the one who wanted me to come back since long. Also my kids were small then and I had given them my four and a half years. Though they are still very small and I know it would be little difficult but lets see what happens."

So are there any chances to see Gauri and Hiten act together? This is what she says, "Well you may never know as I do get offers for that as well. But right now all I can say is that I'm ready to come back on television."

It would be interesting to see Gauri coming back on television. Isn't it?

poiu123 6 years ago Eager to see her back. But why a mom's role she can also play bhabhi or elder sis.

*Dev.* 6 years ago I saw her in Kutumb! she should come back soon!

Angelicprinces 6 years ago wow! Welcome back! Have been waiting for ages.so good to know.Thanks for the article!

adventure_gurl 6 years ago thanks for sharing have been waiting for her comeback for ages, glad Hien is supporting her