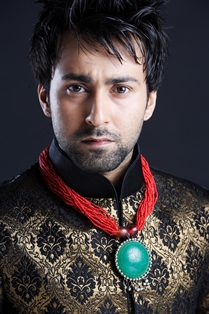 He's cute, he's lovable, he's just the type of guy your Mommie would say Yes' to go out for a date. TV actor Krishna Bharadwaj has a holistic appeal about him and he has charmed not just the audiences but also his co-actors. Despite having done lead and pivotal roles in TV soaps like Jasuben Jayantilaal Joshi Ki joint Family, Kasak, Sukh by Chance and R.K. Laxman ki Duniya, he has remarkably achieved success on his own merit.

Here is an in-depth interview, Krishna talks about his ideologies on Friends, Films, Fame & Fun.

Somehow I have never had some great buddy bonding with colleagues from the glamour field. Most of my friends have been from normal life and they always keep me grounded despite my miniscule celebrity status.

One friend (who wants his name to be with-held) who really stood by me is my buddy from my hometown in Ranchi. He always trusted my instincts and had enormous faith in me as an actor. In fact, had it not been for him, I wouldn't have been able to make it in the television world at all. I was just another dance trainer running a dance academy in Ranchi. Quite content with my life, it was he who inspired me. He helped me in many ways. And all this was unconditional, just pure friendship.

Like they always say, you need a Lord Krishna to show you the path, support you all the way and offer that serene holistic smile in moments of despair. My Ranchi friend was my Lord Krishna. I owe all what I am today to him.

There have been success stories with TV stars making it big on the silver screen. It's all a matter of choice and being in the right place at the right time. Every TV actor aspires to be shimmering on the big screen. I too have aspirations but with a dash of difference. Having being an actor, what tempts me to Bollywood is not only main lead roles but roles that make a difference to the script.

As an actor, I am highly schizophrenic. Challenges tempt me, monotonous roles bore me. Today mainstream film makers like Anurag Kashyap, Vishal Bharadwaj, Dibakar Banerjee and the new breed of multiplex film makers are making sensible business films. It's a dream to work with them. Some talks are on, so very soon you would hear some official announcements about my trip to filmdom.

Fame and success has never gone to my head. In fact, when I first won my cash prize as the winner of the reality show Bluff Master, I was in a tizzy. A small town guy from Ranchi could have gone haywire with so much money and instant fame. But I took baby-steps and treaded on egg-shells to do some good work in television. If all your existence amounts to is chasing fame for fame's sake, it is a life built on sand and is liable to come crashing down around you. I prefer to be sane and sorted.

I have never been a party animal. My idea of fun varies on a daily basis. I do meet a lot of new people and somehow everyone considers me to be their best friend. Maybe it's the naughty twinkle in my eyes or just the pure honesty that seeps out from my aura. Off late, I have started attending parties. I feel it helps to circulate and catch up with people from your trade. Invariably I am getting invited for dinners and parties once I leave a party. Someone complimented me the other day, You have a cute smile, but I am sure you have a naughty devil cocooned within you'. I just laughed.

Before Death, SP Balasubrahmanyam Has Sung For Upcoming ...
46 minutes ago

Sushant's Family Displeased With Attention Being Diverted ...
48 minutes ago

After Ten Months Jacqueline Fernandez has Finally Re-united ...
58 minutes ago