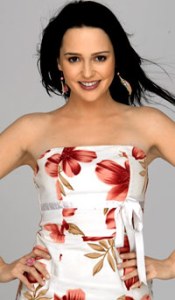 She entered into the Bollyworld as a sweet and charming girl in Mera Pehla Pehla Pyaar (MP3) and was lately seen in Star Plus' Zara Nach Ke Dikha. After a long break in Bollywood, she is back with two of her films, 'Flat' and Dunno Y Na Jaane Kyu, which are releasing on 12 November.

Hazel Crowney, chats with Bollycurry about her latest releases and her experiences in the industry.

Two of your movies, 'Flat' and 'Dunno Y Na Jaane Kyu', are releasing this week. How are you feeling?
I am really very surprised because it's a long break after MP3 that I am doing movies and two of my movies releasing on the same day is a coincidence.

Are you apprehensive about the reaction of the audience?
Yes I am, because you cannot control their reaction and I just hope that the audience would appreciate my work in both my movies, 'Flat' and 'Dunno Y Na Jaane Kyu'?

How was the experience of playing a character like Geethika?
Playing a character like Geethika was very difficult. Because as I come from a western background, my body language is completely western and I had to work hard to get into the body language of an Indian village girl. And the body language of a traditional Indian girl is very different as they are very shy and subtle. I also had to work hard on the dialogues and had to undergo training in Hindi, and altogether the role was completely challenging.

In both the movies you have worked with actors who have already made their mark in the industry and also you have shared screen space with veteran actors of Bollywood like Helen, Zeenath Aman and Kabir Bedi, how was the experience?
It was great acting with all of them and acting with people who I admire the most is like a dream come true. In the movie 'Dunno Y', I play the granddaughter of Helen and I have my greater part with her and working with her is a great learning experience. In the movie 'Flat', most of my scenes are with Sanjay Suri and he is a wonderful and natural actor.

There are several controversies related to the movie 'Dunno Y', how would you react to it?
When I was offered the role they just told me that there is an element of homosexuality in the movie, but my character is not at all controversial as it is very positive and family oriented. I think with the movie, the makers are trying to capture the gay audience.

Out of the characters that you did, which is the one that is close to your heart?
All are close to my heart and all were great learning experience.

You have been associated with ads, albums films as well as reality shows, how was the journey and what do you enjoy most?
The journey has been a wonderful one and I personally feel that ads are easier to do compare to the others, as the unit is more organized and clear about their shots and schedule.

How was it doing a reality show like Zara Nach Ke Dikha?
It was really tough as there is intense training involved and I could not sleep properly for four months because of the tension I was going through. I realized that reality shows are not meant for all and one should have a competitive mind for that. But I feel that I have improved myself as a dancer after the show and people have started noticing me.

Have you been approached with other offers?
I have been approached by the television industry for daily soaps but I personally do not prefer to do it as they are disorganized and very hectic.

If you are approached by other reality shows, will you take it up?
I will have to see that and if a show like Jhalak Dikhlaja comes up, I would definitely be willing to do it.

Any message to your fans?
Please watch my movies, especially 'Flat' because I have a very prominent role in that.

Rhea Chakraborty to make comeback in movies in 2021: Confirms Rumi ...