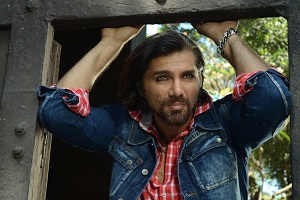 Popular actor Chetan Hansraj who is currently seen as Adham Khan in Zee TV's popular show Jodha Akbar will also be seen in Sony TV's newly launched series Encounter. Having played so many negative characters earlier, the talented actor has been roped in to play the character of a gangster in one of the episodic of the show.

TellyBuzz spoke to Chetan to know more about his character, experience shooting for the show and much more in this conversation.

Talking about his character and experience shooting for the episodic, Chetan told TellyBuzz, "I am playing the character of Mangya whose name is Mangesh Rajmaare and he is a gangster. He used to be a very small kind of a gangster but from then he suddenly becomes one of the topmost gangster of the city. So, this would be his story of becoming a big gangster and how everything ends up in an encounter. The experience of playing Mangya is outstanding.  Mangya's character is shown to be a psychotic one and he is crazy. He has only one passion in life and that is to kill people. He enjoys the whole process of killing someone. He is being supported and is influenced by some political parties and that is why he becomes a very big don. Playing such a role is really amazing and larger than life and I feel that I am shooting for a film. The way it has been shot and directed is really amazing."

So, did he prepare himself for playing this character? He replied, "Not really! What my director tells me and the creative people explains to me about my character, I go accordingly."

Chetan is quite happy working with the team and he is enjoying a lot while shooting for the show. He concludes saying, "The team is outstanding. It's so professional, loving and respectful team to work with. It's the first time I am working with them and they are amazing. The way they treat their artists is superb."

We wish you all the best for your role Chetan!

TheItalianBride 6 years ago Chetan will rock this role too!

Will miss you in Jodha Akbar

AkDha_Fan 6 years ago Chetan ur doing an amazing job in Jodha Akbar...!!

Sadda Haq Actor Harshita Gaur gears up for the release of ...
27 minutes ago

Ranveer is Fulfilling his Husband Duties towards Deepika? ...
46 minutes ago