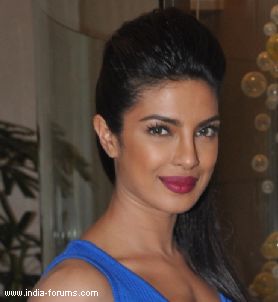 The going is great for actor-singer Priyanka Chopra. She is out with her third solo single "I can't make you love me", which made it to the No.3 spot on Itunes India in less than 24 hours.

After the riveting success of "In My City" featuring Will.I.Am and "Exotic" featuring Pitbull, Priyanka has nailed it with her third song "I Can't Make You Love Me". It is a unique cover of the Bonnie Raitt's 1991 song that made it to Rolling Stone Magazine's 500 Greatest Songs of All Time.

"My cover of 'I can't make you love me' is really different because the original is a ballad and we have used dance music for my version of the song. Watch out for the video," Priyanka, who launched the new track Tuesday, said in a statement.

Her rendition of the ballad is already on its way to making waves on the international music scene.