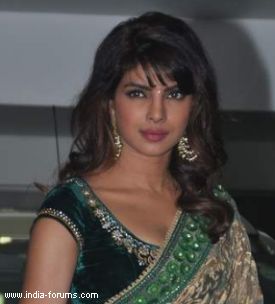 Actress Priyanka Chopra has expressed happiness and gratitude for representing "Girl Up", a campaign by the United Nations Foundation, at the annual Global Leadership Dinner.

The actress took to Twitter to talk about the Wednesday dinner, an annual event attended by representatives of diplomatic, business, government, philanthropic, media, celebrity, and social sectors.

"So proud to represent 'Girl Up' at the UN global leaders gala...Met so many inspiring people who bring about so much change...Thank you," Priyanka posted on the microblogging site Thursday.

The actress is one of the champions of "Girl Up". Others, who are part of the programme, are filmmaker Nigel Barker and three-time Olympic medalist Rebecca Soni.

The initiative gives American girls an opportunity to channelise to raise awareness and funds for programs of the United Nations that will help some of the world's hardest-to-reach adolescent girls.